Home / WORLD / ‘Our allies don’t trust us, our enemies are emboldened’ – vet who survived Kabul bombing on US disastrous failure in Afghanistan

‘Our allies don’t trust us, our enemies are emboldened’ – vet who survived Kabul bombing on US disastrous failure in Afghanistan 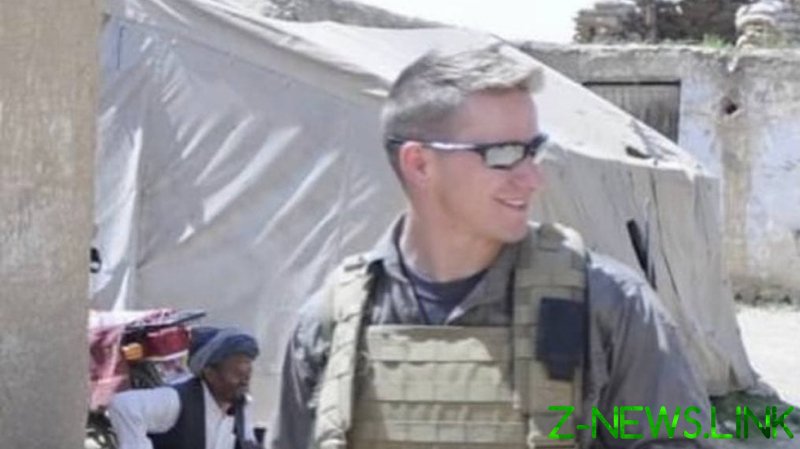 Justin Parks is a combat veteran with a degree in Arabic studies, who has served in the Marine Corps and the Army and has done multiple tours in Afghanistan and Iraq. He was a Door Gunner on his third deployment to Afghanistan in 2010, where he notched up 260 flight hours.

He survived the bombing in Kabul on May 31, 2017. It was the deadliest terrorist attack in the Afghan capital since the Americans invaded in 2001 to take out the Taliban – over 150 people killed and over 450 wounded.

Justin talks in a detached way about the site of the attack being littered with body parts and torsos hanging in the trees. He says that there was no water and no power and “protest crowds pop-shotted us for two months.” His intestines were “destroyed,” he was close to death. To this day Justin remembers the smell of rotting bodies.

“Guys come back from tours and the damage to their psyches is profound. They often become estranged from their loved ones.”

His book on that tragic day in May will be published soon. It should be required reading to all those under-read Americans living in their mothers’ basements who, thanks to Critical Race Theory, believe that quoting from Martin Luther King’s ‘I have a dream’ speech constitutes a ‘microaggression.’

Justin Parks has fought in the Middle East under US Presidents Bush, Obama, Trump and Biden.

Since the triumph of the Taliban, he has received heart-wrenching texts, voice-messages and photographs from Afghans that worked alongside the Americans. There is video footage of Afghans handing their babies over a wall topped with barbed wire, begging the British soldiers to take their children.

Last week the Taliban seized US military biometrics devices which could help to identify those Afghans who assisted the coalition forces. “My guys are in hiding all over Kabul,” Parks says. “Our allies don’t trust us and our enemies are emboldened.”

The devices, known as HIIDE (Handheld Interagency Identity Detection Equipment), contain identifying biometric data such as iris scans and fingerprints, as well as biographical information and are used to access centralized databases. Why were they allowed to fall into the Taliban’s hands?

Not surprisingly, the Defence Intelligence Agency hasn’t responded to a request for comment.

The American mainstream media doesn’t ask difficult questions like that. They are attempting to rewrite history and put a spin on the Middle East narrative that exonerates their tragic dereliction of government. President Joe Biden, who oversaw the abandonment of Saigon, has created Saigon 2.0.

America had initially abandoned up to 80,000 Afghan allies and about 10,000 US citizens behind enemy lines with no clear plan to get them to safety. On Sunday, Biden said Washington was considering extending evacuation efforts beyond the August 31 deadline to leave Afghanistan.

“We have a long way to go, and a lot could still go wrong,” he added.

There are billions of dollars worth of cutting-edge US military equipment left as a parting gift to the Taliban. This reportedly includes grenade launchers, missiles, armored vehicles, aircraft and many thousands of machine guns.

But don’t worry, Sleepy Joe has assured us they will behave… I wonder, what does a President have to do to get impeached?

Mark Levin, the foremost conservative commenter and constitutional scholar whose book ‘American Marxism’ has in less than two weeks sold almost a million copies in America, torched the disastrous Afghan withdrawal: “On Wednesday Biden walked away from the media, taking no questions. Kamala Harris is missing in action. Speaker Nancy Pelosi praised the withdrawal from Afghanistan.”

In July Biden was asked if he saw “any parallels between his withdrawal from Afghanistan and what happened in Vietnam” (in which he also played a role.) “None whatsoever. Zero,” he replied.

Justin Parks argues that US defeat in Afghanistan “is worse” than the fall of Saigon in 1975.

“This is the biggest hostage situation in the history of America,” he says.

The Taliban are going door-to-door searching for individuals on priority lists – those who aided foreign forces will surely be executed according to Sharia law, he believes.

“The Taliban say that they will be different,” says Justin. But this is al-Taqiyya – the kind of self-protection practice and the Islamic justification for lying and deceiving.

Justin, like many veterans I spoke to, is heart-broken by the treason they see committed on the American people by the current government.

“Power and leverage has been given to the terrorist organization we fought for twenty years. Biden did this without consulting NATO.”

General Milley, Chairman of the Joint Chiefs of Staff, insisted “there was nothing that I or anyone else saw that indicated a collapse of this army and this government in eleven days.” His comments were made shortly after the New York Times reported that US intelligence officials had been warning of a quick Taliban takeover in Afghanistan.

Milley, let us not forget, was the General who apologized for participating in President Trump’s photo-op at St. John’s Episcopal Church in Washington (which had been set on fire the previous night) during last summer protests that erupted following the police killing of George Floyd. General Milley is apparently more worried about white male rage and the alleged threat to the nation by ‘white supremacists’ than doing the morally decent thing and getting out Americans and the Afghans – highly-trained people, some of whom speak five languages – who were working with the coalition.

President Biden kept claiming the US would not witness a Vietnam-like situation in Afghanistan. Now he insists that no-one in the White House could have done anything better. There were no mistakes. No one should feel guilty.

Veterans I spoke with disagree vehemently.

“This was a choice that they made over months. They knew it was going to happen but they did it anyway.

“Biden doesn’t understand what this means to America’s authority in the world.”

“Biden is breathtakingly arrogant and delusional. He is also entirely bloodless.”

A Gold Star mother who lost her son, a Navy Seal, when his helicopter was shot down in Afghanistan said “Lady Liberty is hanging her head in shame.”

Like hundreds of mothers who had children who paid the ultimate sacrifice, she is “incensed, infuriated and angry” as well as “saddened and ashamed.”

“Mark this day as the day the U.S.A. officially fell from grace as the world’s super power due to the ineptitude, the incompetence and the dereliction of duty by a so-called “commander-in-chief,” said Judge Jeanine, a television star and glamorous legal beagle.

Another described the utter failure of Joe Biden’s administration as a “gut-punch” to families and veterans who believed in the mission to liberate Afghanistan from “the medieval barbarism of the Taliban and ISIS.”

It was reported that two months before the fall of Kabul, Biden dismantled the Trump-era’s Contingency and Crisis Response Bureau (CCR) set up to provide aviation logistics and medical support to Americans if they were trapped overseas. Biden has systematically undone everything Trump accomplished.

As he concluded his July 8 speech, Biden attempted to change the subject of the catastrophe in Kabul.

“We have to defeat Covid-19 at home and around the world … [and] take concerted action to fight existential threats of climate change,” he asserted.

The rapid rise in Covid-19 infections and deaths in the United States, paired with the devastating report by the Intergovernmental Panel on Climate Change, suggests that meeting these challenges may be far more difficult than those the US faced and failed in Afghanistan.

Many veterans I spoke to and their families also blame the former President Barack Obama for “dividing America.”

Says Justin: “Americans were proud of us. They flew American flags on the 4th July. They tied yellow-ribbons around trees. We felt as though we were accomplishing something in nation-building and ridding Afghanistan of Islamo-Nazis. We built schools. We saw girls being allowed to be educated. There were two free and fair elections. With Obama our hands were tied. There were rules made by Obama and Clinton to soften our tactics.”

“We would go into an area and root them out and establish dominance. Around the surge of 2007 we began noticing more IED bombs. Intel we were gathering was pushed to the side,” he states.

Many veterans spoke about the fact that while those who served their country are abandoned, preference is given to aiding illegal immigrants.

“We didn’t even get a beret. Where is our beret?”

“Whose side are Obama and Biden on?” said one Navy Seal.

One of the most scathing criticisms of Biden came from Meghan McCain, the daughter of late John McCain, one of America’s most famous veterans.

“We’re a laughing stock of the world,” she tweeted.

What we are witnessing is a managed destruction of America.