Home / Society / On the patterns of the biblical “Exodus”

On the patterns of the biblical “Exodus” 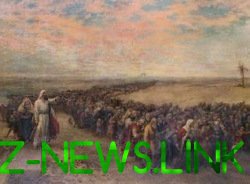 After the March election in 2018 increase in retirement age on the rating of the Russian government was dealt a blow that turned a huge part of the population.

In a large number of regions of Russia, the wages of ordinary people that make up the absolute majority of the electorate, in fact, slightly more than 10 thousand rubles or, as we call it, “Ducat”. People were waiting for retirement and the bulk of them still had to work to get to this piece one more, in the form of pensions.

And then they have this pension piece (and many pension and this amount does not reach) took it and, with some fright, seized, telling tales about how good life working pensioners.

At the same time, rising prices on everything, regardless of exchange rates, oil prices and other factors, which the government loves to justify its domestic economic and social policy. People can not believe the fact that the notorious Western sanctions and a ring of external enemies make his life worse, how to get rich oligarchs close to the Kremlin. And some even manage, withdrawing billions of dollars from Russia, to become laureates of various Tops of the countries where these same sanctions and military threats coming in.

And how should universal, openly rude remarks about the people of officials and deputies of different manner? “No one asked you to give birth“, “poor pensioners are quitters and lazy“, “fuckin ‘ … are always the same“, “as long as you pay the mortgage, can apply to children in children’s home“, “if you don’t have enough cash, you need to eat less“… to List all that crap for very long.

Oh well, if only said. But that is exactly what they think. They apparently sincerely believe that the vast majority of the population is “simpletons”, “the losers”, “cattle”. Of any type there are different workers, peasants, teachers, doctors, military, scientists and other “losers”.

How think and say the people occupying very high positions? For example, the Commissioner of the Russian President for human entrepreneurs Boris Titov – “housing for young” is anti-social program, it is uneconomic program. Why young should have their homes in the property, even with the help of the state?“. Or the Chairman of the Federation Council Valentina Matvienko advised the students to live in the Dorm, and to buy an apartment, “let this 50 square meters, but it’s a good idea“. And the Deputy of the state Duma Sergey Vostretsov proposed to penalize the unemployed, believing that “theeducated unemployed, if I can’t find a place, need to get painters and plasterers, and if he refuses low wages, they should be punished“.

They do know what they are talking about? It’s scary! In the sense that they are terribly far from the people, as classic said. And, having departed to another “orbit”, they are unlikely to want to return back to earth, of course, if their people very strongly do not ask. As it was a century ago…

Did they, the poor, do not understand that Russia is not measured by money. The wealth acquired by dishonest means, despised by most of the population is not because it is unattainable for him, and then only, that it is profoundly immoral.

To list all the actions of the authorities produced in recent years to the detriment of their own people is a thankless task, but the question arises, why is this happening?

However, in recent times, about the true purpose of these actions little by little begun to be spoken.

First, Vladimir Pozner, saying in January that “until there is a change of generations, until those who do not know what the Soviet Union did not experience this, which very different look at life, nothing will change“.

Then, at the Gaidar forum, Anatoly Chubais said the same thing, only in other words: “Than older people – the more it hurts, and that means more turns to the doctor. At the same time, regardless of age, everyone pays the same taxes. Why young people who almost never get sick, have to pay for the treatment of old? It is necessary to introduce a special tax, which will increase with age, so the elderly are not hung on the neck of the youth.”

How can you not remember saying the same Chubais in the early 90-ies, when, in justifying privatisation in Russia, he said: “it is Not necessary to think about the people, well, let them extinct 30 million people, they do not fit into the market”.

What is it? It turns out that “perestroika” and “democratic transformation” was planned on the patterns of the biblical “Exodus”. 40 years, Moses led the people through the desert that, according to theologians, died, all those who remembered the Egyptian slavery.

Therefore, it takes them a nuisance, forty years too soon will pass, and they, those damn “scoops”, it’s not extinct and not extinct.

And let’s retirement age raise, prices raise with taxes, and new would be good to introduce, for individual farms go, the fines will increase… and so on.

Oh, that would have to come up with the sort to complete successfully started the process?

There was only the memory of the great Victory to trample in the mud. And there are all these “if Urengoy”, a girl from “Comedy club”, posters on the streets with the image of Nazi soldiers, “Yeltsin centers” wildest overtones of Soviet history, Solzhenitsyn monuments, General Krasnov and the Board Mannerheim, and dedicated to the great dates, statements and “works” so-called “creative” intelligentsia…

And then these people wonder why the popularity of Joseph Stalin and the Soviet Union each year grows and grows, including among young people.

We can see there is nothing to compare…