Old school documentary about the most paranormal place in America (TRAILER)

Do you like programs about aliens? Or about Bigfoot? No, to believe in such you are not forced, but agree, there is a peculiar charm in some shows. At least in my childhood so I thought. Maybe it was the fact that these films are the bearers of fantastic folklore, urban legends and tales, by which we bring into everyday life a supernatural element? After all, if we imagine that somewhere there is splashing in his quiet Scottish lake shy plesiosaur, Nessie, and all around the world immediately becomes different, fantastic, intriguing color.

Besides, maybe on the planet has some strange places? At least one such American enthusiasts Seth Breedlove and mark Matzke decided to make a documentary. The official synopsis says:

The incredible story of one of the most bizarre places in America, and paranormal activity that has occurred there for decades.

The documentary is called “the Invasion of chestnut ridge,” and we will be talking about the same hill that stretches for many miles in Bedford County, Pennsylvania.

The biggest event that shook this place, occurred on 9 December 1965 and is now known as Expulse the incident. Then from the sky fell a unidentified object that with all the efficiency pocketed military. Later it turned out that the famous project Blue book was engaged in the study of this subject, qualified as a kind of flying machine in the shape of an acorn.

But the retelling of the sensational stories with a UFO, the creators of “the invasion of chestnut ridge” is not limited. It turns out that these lands and Bigfoot hesitated, and creepy huge birds flew, and sometimes you can see a strange light coming as if from another dimension.

And this whole crazy entertaining material is supplied in the spirit of thematic documentaries and television shows 70-80 years. Then the VHS effects, and pumping music, and a sort of illustration — from everything breathes old school!

In short, just watch fresh promo of the film, and perhaps it will amuse you. In addition, there is the first trailer for the documentary, which is also quite a nothing.

The creators of “the invasion of chestnut ridge” are going to ride with him on several events in the USA and October 20, the film will be available in Amazon and Vimeo OnDemand. 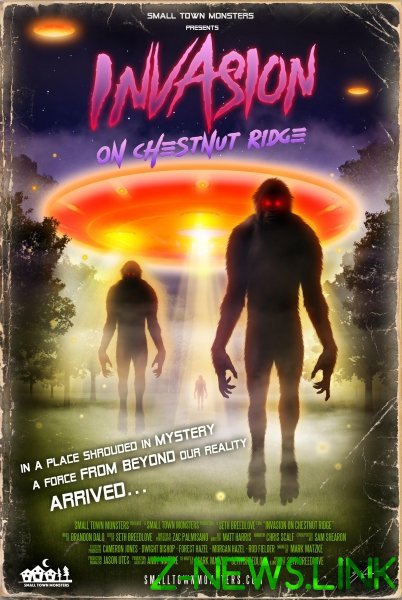