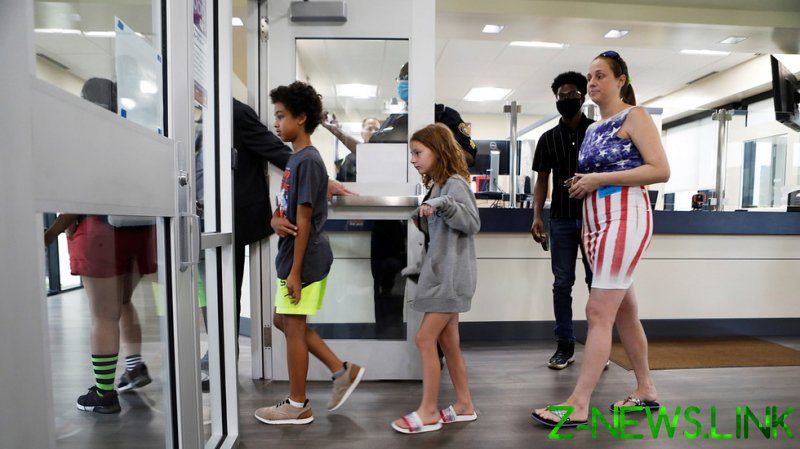 The same day a new school year kicked off in Oklahoma, Norman Public School Board member Linda Sexton went on a fiery tirade against a law prohibiting school districts from imposing mask mandates unless a state of emergency is declared.

Speaking at the board meeting on Monday, Sexton said that she was “very, very angry” that children as young as five who cannot be vaccinated will be “exposed to a virus five times more contagious than the one we masked everybody for last year,” referring to the Delta variant of Covid-19, which is believed to be driving the current surge in infections across the US.

Sexton went on to argue that “if anyone needs to flee to a virtual school,” it should be the children whose parents refuse to have them mask up. Calling on the neighboring school districts to join efforts to repeal Oklahoma Governor Kevin Stitt’s ban on mask mandates, Sexton went as far as to argue that mask-free children are effectively killing their schoolmates.

Sexton’s broadside against the governor elicited a round of applause from the audience.

Stitt signed Senate Bill 658 in June, which significantly restricts the use of mask mandates and bans Covid-19 vaccine passports in educational institutions. Its author, Republican state Senator Rob Standridge, said at the time that the bill’s most important feature was that it allowed parents to decide whether their unvaccinated children would mask up, barring schools from imposing mandates.

The law now faces challenges by state Democrats, with a group of lawmakers introducing a House bill on Monday dubbed the “Safe at School Act.” If passed, the act would overturn the state’s ban on mask mandates, though it is not expected to clear the lower chamber, which has a Republican supermajority.

Under the current legislation, the only way for school districts to impose mask orders is under a state of emergency, which would be declared by the governor for specific areas. Stitt, however, has signaled that he has no plans to do so. In late July, the governor pushed back on calls by some Democratic leaders to declare an emergency, insisting that Oklahomans should be able to decide for themselves what health precautions to take.

The issue of classroom mask mandates has become increasingly polarizing as children go back to school after being forced to adapt to online learning due to the virus outbreak last year. The debate has been raging whether teachers and staff should be subject to vaccine mandates and what to do with children who are either unable or unwilling to wear masks, with governors and school districts vying for the authority to pass and ban any such mandates.

Republican Governors Ron DeSantis and Greg Abbott of Florida and Texas have emerged as among the harshest critics of vaccine and mask mandates, passing bans on the measures and vowing to fine districts that defy them.