Home / WORLD / Nord Stream 2 pipeline a political defeat for US, but a victory for Russia, Germany… and, in long run, possibly Ukraine itself

Nord Stream 2 pipeline a political defeat for US, but a victory for Russia, Germany… and, in long run, possibly Ukraine itself 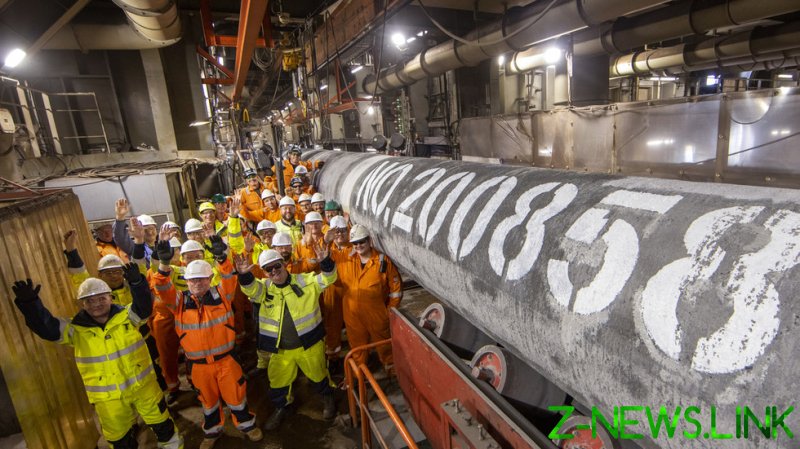 Now, the team behind the construction, having welded the final segment into place, say gas could start flowing as early as October. While some German regulatory decisions are still pending, there are no clear signs Nord Stream 2 can be blocked at this point.

“We expect that millions of European consumers in the near future will be able to receive Russian gas along the shortest, most economical and environmentally friendly route,” the Russian Foreign Ministry said on Friday. “It’s time to stop creating obstacles to this important project.”

In the future, the new pipeline is supposed to carry up to 55 billion cubic meters of gas per year, the equivalent of the needs of about 26 million households, according to its developers.

Neither long-standing objections by some members of the European Union – particularly in its east – nor last-minute sanctions by the US were able to stop the project. In that sense, its completion signals a diplomatic defeat for America and the European opponents of Nord Stream 2, and a victory for Germany and Russia, even while both have to adhere to some conditions, mostly resulting from a compromise between the US and Germany as well as EU policies and regulations.

For Russia and – in spite of politicized allegations to the contrary – the rest of Europe, the new pipeline brings more, not less, stability to the strategically important area of energy trade. The concerns of Ukraine, which are unique to Kiev, have largely been disregarded by the EU’s powerbrokers, and the refusal to tie the future of the bloc to the demands of a third party is a practical step.

Insofar as the European Union’s dependence on Russia may increase, so does Russia’s dependence on the EU. Yes, Moscow can sell more gas, but the EU, therefore, becomes a more important export partner. That said, it hardly amounts to a “pyrrhic victory” for Russian President Vladimir Putin, as one commentator suggested on Ukrainian TV. But it is true that mutual dependence can promote realism and cool-headedness on both sides, which is a good thing, as German Chancellor Angela Merkel has, in essence, also argued.

From Ukraine’s perspective, however, things may very well look different. Its leadership and large parts of its public (at least as reflected in the media) have long taken the position that Nord Stream 2 is not really an economic project at all, but rather a Russian geopolitical weapon, aimed most of all at depriving Ukraine of political leverage as well as revenue. While Russia is the villain in this Ukrainian story, the role assigned to Germany oscillates between nasty accomplice and stupid enabler.

From this Ukrainian point of view, it is no consolation that, while giving up its resistance, the American government has insisted that it still sees the pipeline exactly as Ukraine does: as a sinister Russian geopolitical instrument that should, ideally, be opposed. And yet, it ceased opposing the project.

If you put yourself in the shoes of Ukraine’s leadership, it’s clear that that sort of “agreement” makes things only worse. President Volodymyr Zelensky may well have said to himself: “The Americans say they believe in our case, but they are still letting us down. So either they are lying, or they are cynics and we are just not that important to them, or they are too weak to overcome Germany and Russia, or all of the above.”

Against this background, US President Joe Biden’s promises to Zelensky, during the latter’s largely disappointing recent visit to Washington, won’t help much. Moreover, assurances that America would impose more sanctions if Russia were to abuse its new pipeline leverage can only sound hollow from the man who shares the responsibility for America’s ‘Great Rout of Kabul’. In that sense, with friends like Washington, who needs enemies?

Add to that the fact Germany’s promises of exerting pressure on Moscow to keep gas flowing through Ukraine as well, even beyond the end of the current contract in 2024, have a false ring too, especially since Putin has already made it clear that Russia, unsurprisingly, won’t be pressured on that issue. Ukrainian disappointment is plausible – at least on the Ukrainian leadership’s own terms, as mistaken as they may be.

That, however, brings us to the really important question: Ukraine’s elites (yes, and even the public in the media) not liking something does not, actually, prove that it is really bad for Ukraine. Ukrainians, just like others, are not infallible and can be mistaken about what is good for Ukraine, especially in the long run. This is not “denying them agency”; it’s simple realism.

So, is there likely to be an upside for Ukraine to the completion of Nord Stream 2? The short answer is yes, definitely. For a longer answer, we have to look at some details.

Going beyond generalities, what have been the reasons for Ukraine’s unrelenting opposition to Nord Stream 2?

As so often, follow the money. Behind all the grand talk of holding the line against Russia for itself and the “West,” one major, probably the central, factor in the Ukrainian elite’s dislike for the new pipeline has been the fact that if Russia really were to cut out the middleman and forego gas transport through Ukraine entirely, then the country would lose billions of dollars in transit fees per year.

Yet even some popular Ukrainian commentators, who cannot stand Russia and are critical of Germany, admit that, for once, it is not all Putin’s fault. Ukraine, they note, also has to blame itself because it failed for decades to reform its oligarch-ridden and corrupt gas trade and transit system. When your economic viability as a state is tied to your self-chosen political adversaries moving fossil fuels through your country, diversification seems like a good idea.

Hence, a hit to the transit fee bonanza could, actually, help the country become politically cleaner, more than all the useless anti-corruption rhetoric produced by the West. Yes, it may be a harsh withdrawal, but has any other kind ever worked in Ukraine, or, really, elsewhere?

From another angle, Nord Stream 2’s completion was probably almost inevitable. The project is built on such massive shared interests between Russia and Germany that neither EU nor American opposition could stop it – and this during the worst period of Russia-West relations in general since the end of the Cold War. That, if you are not indoctrinated or a tad naive, is an empirically observable fact that should tell you something.

Given, then, that the opponents of Nord Stream 2 most likely never stood much of a chance, Ukraine’s leaders would be smart to reassess the current outcome carefully. They might even find a quantum of solace there. Because the real alternative has never been that Ukraine will get what it – probably wrongly – wants over Nord Stream 2. Rather the politically relevant question has been and remains: what can Ukraine get in return for accepting the inevitable?

Obviously, getting anything at all, when you have no real leverage because your cause – preventing Nord Stream 2 – is lost anyhow, is always a net gain. And that is precisely where Ukraine really is at this moment. Once you look at it from this point of view, Ukraine has something to show for losing something that was really never Ukraine’s to lose in the first place.

It is true that US and German assurances are mere words. Yet it is also true that any flagrant or brutal moves by Russia would help Ukraine use these words to pressure the West. It is, therefore, in Moscow’s own interest to proceed in a manner that may not be generous but won’t risk unnecessary conflict either. This is not a panacea, but it’s also not negligible and really a rather ordinary basis for serious negotiations among serious parties.

Germany has also promised money to help Ukraine develop hydrogen energy structures. Critics have rightly pointed out that those promises are less than robust if you inspect the details. The German state is really only offering a modest €175 million (€206 million), which is somehow supposed to attract corporate investment so that, in the end, a billion euros will, rather miraculously, emerge. No wonder president Zelensky has already publicly and rather undiplomatically scoffed at this offer. Yet it remains to be seen if his facile dismissal is meant mostly for public consumption.

In spite of the flimsiness of the German money promise, there is a concrete reason to take it very seriously. The upcoming German elections may well produce a coalition including the Greens. In that case, the upshot could be that the Greens won’t be able (perhaps to their own relief) to pursue their ongoing opposition to Nord Stream 2 itself. But they would be in a good position to demand some substantial compensation for Ukraine.

And since the hydrogen idea is inherently Green, this would be a perfect opportunity for a win-win, pacifying German coalition politics and padding the Ukrainian budget.

That Ukraine is not happy about Nord Stream 2 is understandable, if probably based on false, short-sighted premises. But it is high time for its leaders to take a very hard look at what Nord Stream 2 really means and how it could, actually, benefit their country. That would be the smart response, at least.