Home / WORLD / No matter who wins the US election, expect more sabre-rattling. The only question is when and where the next conflict will begin 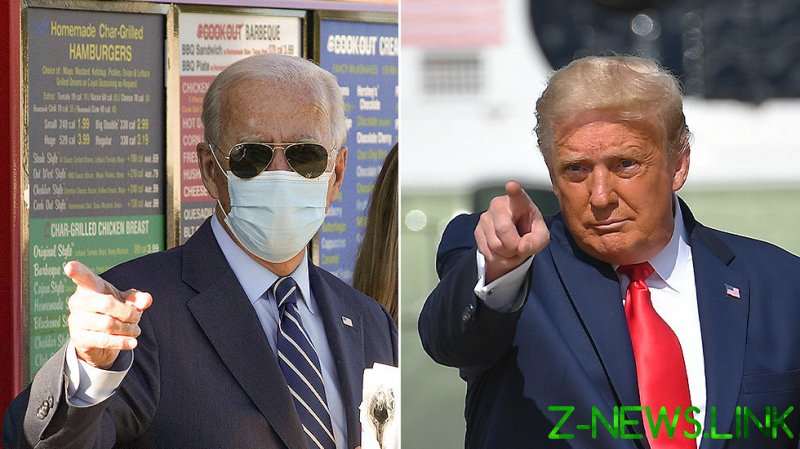 And, this lack of debate does not accurately reflect the American electorate’s concern about such matters, with a recent Pew Research Center poll showing a solid 57 percent of registered American voters consider “foreign policy” a “very important” issue.

Of course, this should be an important issue, given the US spends a staggering, and I would say shameful, amount of its resources on its military: some $730 billion a year, or more than the next 10 high-spending countries combined. Meanwhile, the US government cries poverty when the American people demand such items as universal healthcare and income support during the global pandemic.

Sadly, I don’t see this state of affairs getting any better, regardless of who is elected on November 3. While Donald Trump has frequently criticized the US’ “endless wars,” and made noises about bringing home American troops, he has largely not followed through on these proclamations. It’s true that he appears to be trying to wind down the US’ almost 20-year war in Afghanistan, and that’s a positive. However, he has massively stepped up bombing operations in Somalia, continued the US support of the Saudi onslaught in Yemen, and maintained a significant number of troops in Iraq, despite Baghdad’s demand that the US leave. The president signaled earlier this year that he would withdraw troops from Syria, only to reverse his position shortly thereafter, announcing that the US would remain in order to take Syria’s oil – but that’s actually considered a war crime.

While Trump’s been given credit by some for not starting any new wars, this was not due to any lack of trying on his part. His incessant provocations of Iran, including the illegal assassination of its beloved General Qassem Soleimani earlier this year, seemed intended to draw that nation into a military confrontation. It was only Iran’s restraint, in my view, that prevented this confrontation from happening.

It must also be noted that Trump has greatly stepped up US warfare by other means – namely, through economic sanctions that can kill as many people through the denial of food and medicine as guns can with bullets. And, he has done so, it must be emphasized, during a worldwide pandemic. Currently, at least a quarter of the world’s population is under some type of US sanctions regime, with eight countries complaining to the UN earlier this year that these sanctions were greatly hindering their ability to cope with the Covid-19 outbreak. In short, Trump has continued the US’ role as a merchant of death throughout the world.

As for Joe Biden – who, as a senator, played a key role on the Senate Foreign Relations Committee in pushing the US towards its disastrous 2003 invasion of Iraq – it appears that he could be even worse in terms of foreign policy than Trump. First of all, it must be pointed out that the bloated military budget of the US is a bi-partisan creation, with a majority of Congressional Democrats voting with Republicans on at least two occasions – in 2017 and 2019 – to give more funding to the military than Trump had even asked for. Meanwhile, Biden has at times been scathing about Trump’s foreign policy from the right, criticizing Trump, for example, for being willing to meet with Venezuelan President Nicolás Maduro and of not doing enough to topple his government. He also attacked Trump for meeting with Kim Jong-un in an attempt to make peace with North Korea.

Biden has also been critical of Trump’s alleged “coddling” of Russian President Vladimir Putin, even while Trump has backed out of key nuclear agreements with Russia and threatened to place nuclear weapons in Poland. Indeed, it’s hard to think of a more aggressive policy toward Russia than Trump’s, at least any policy short of war, making Biden’s criticisms on this issue quite alarming.

Concernedly, it also appears that Biden is surrounding himself with hawks on his foreign policy team. First and foremost, his chief foreign policy adviser is Antony Blinken, who was Biden’s top aide when he voted in favor of authorizing the use of force in Iraq. And, there is also, as The Nation points out, “Michèle Flournoy, a former Pentagon official and military investor reportedly slated to become secretary of defense; and Avril Haines, the former deputy director of the Central Intelligence Agency, who will lead the foreign policy side of Biden’s transition team if he wins. She crafted President Obama’s policies on drone warfare as well as the administration’s tough approach to North Korea, which Biden has promised to revive.”

In addition, Demoratic policy adviser Susan Rice, who we will surely see in some White House capacity if Biden is elected, has been disparaging about Trump’s announcement that he wished to withdraw troops from Syria, referring to the conflict in that country as “Trump’s Saigon” – an apt reference, given Vietnam was a war of the Democrats’ making.

On the plus side, Biden may be more willing to deal with Iran and to re-enter the nuclear deal that President Obama had entered into, and to roll back some of the more draconian sanctions Trump has imposed on Cuba. Most significantly, Biden has indicated he would end US support for Saudi Arabia’s brutal war in Yemen – which started in 2015 while he was serving as vice president for Obama.

In the end, I fear we can expect continued warfare and bloated military spending by the US no matter who is elected in November. The only question appears to be when and where the next conflict might begin.

The US government, economy, and even culture have become so wedded to war that very few of our leaders are able to see any alternative. And, those who do have such vision, such as Bernie Sanders and Tulsi Gabbard, are vilified and marginalized for their heresy.

It is only a massive peace movement, of the size we have not seen since the run-up to the war in Iraq in 2003, that could possibly stop this US military juggernaut from striking again. If anything has been demonstrated this past summer it is that the American people are willing, even during a pandemic, to gather in huge numbers to protest and demonstrate. Now they must protest against war. Voting will not be enough.