Home / WORLD / Nipah virus: Should the Covid-stiken world be on alert over deadly disease that killed a child in India?

Nipah virus: Should the Covid-stiken world be on alert over deadly disease that killed a child in India? 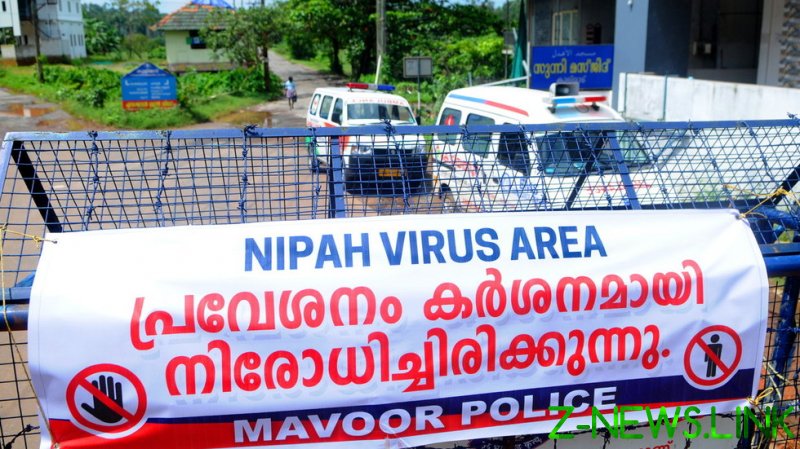 As if it was not enough for India to face the Covid-19 catastrophe, a new matter for concern has emerged. On Sunday, a 12-year-old boy died from Nipah, a rare but a very deadly virus, sparking fears of a possible outbreak.

“Nipah is a virus from the Paramyxoviridae family, a very-very distant relative of, for example, measles. It can infect humans and pigs, it lives in fruit bats,” Professor Jose Antonio Lopez Guerrero, of the Department of Molecular Biology at the Autonomous University of Madrid, explained to RT. “It was detected in Bangladesh, India, in other places, like several cases were detected in Madagascar, for example.”

No treatment, no vaccine

Despite the fact that the virus was first recognized in 1999, for the moment there’s no vaccine or treatment against it. “The primary treatment for humans is supportive care,” according to the WHO.

The virus “may cause grave respiratory problems, but most of the deaths are related to encephalitis that may develop as a result of the contagion,” says Prof. Lopez Guerrero, adding that the chances of dying from Nipah are very high.

“The fatality rate ranges from between 40% and 70%,” adds Dr. Bharat Pankhania, a senior clinical lecturer at the University of Exeter Medical School.

Besides, the forecast for those able to recover is not particularly optimistic, either. According to the WHO, “most people who survive acute encephalitis make a full recovery, but long term neurologic conditions have been reported in survivors. Approximately 20% of patients are left with residual neurological consequences such as seizure disorder and personality changes. A small number of people who recover subsequently relapse or develop delayed onset encephalitis.”

For now, the authorities of the southern Indian state of Kerala, where the confirmed case of Nipah was detected, are trying to identify the possible contacts of the victim. In 2018, an outbreak of the virus in the same state killed 17 people. Now, the disease lays an additional burden on the local health system, as Kerala reported 30,000 new Covid cases on Wednesday, bringing the total number of those infected in the state to 4.28 million.

Nipah is “very virulent and very deadly,” Prof. Lopez Guerrero warns. “The WHO puts it among the most concerning viruses in the world.”

For the Covid-stricken world, the words ‘virus, bats, respiratory problems’ put together may already cause a panic attack. After all, Steven Soderbergh’s movie ‘Contagion,’ which became very popular in the early days of the pandemic, uses certain Nipah features to show its fictional virus.

But maybe it’s still not the time to start panicking yet? “The good news is: Because it’s person-to-person spread, it is easier to control, it won’t be as difficult as Covid, which is aerosol-spread,” Dr. Pankhania says. Prof. Lopez Guerrero also suggests that for the moment the virus seems to be under control, so he doesn’t expect the situation to worsen.

‘Always dealing with the event after it has happened’

Since 1999, there have already been several outbreaks of Nipah. So, one may ask: Why is there still no treatment or vaccine developed for it? Are countries not interested in protection? Well, they are, Dr. Pankhania explains, but the outbreak management plans, unfortunately, are working by the principle ‘it has happened, now how do we stop it?’

“They are always dealing with the event after it has happened,” he explains. “We should really be working on producing prevention, working on vaccines, working on the sources of infection, and the sources of infection are from animals to humans. We are perpetually not attending to the present dangers, because it’s just on the political economic agenda of the rich countries.” According to Dr. Pankhania, the world community is also not doing enough to fight other contagious diseases like dengue fever, malaria and the Zika virus.

The problem is – the rich pharmaceutical companies live in the West, where we do not have the source of infection. So there is less urgency, less desire to do something about it.

“The WHO cannot invent vaccines,” Dr. Pankhania adds. “So there’s typical inaction. Until we suddenly get an outbreak and then a great flashlight of interest occurs on the issue that has always been there.”

So will Nipah attract more attention now, and will more resources be invested in its research? “I want to believe this is something that concerns specialists outside India too, and if the situation starts to complicate, it would be a matter for cooperation,” Prof. Lopez Guerrero says.

Of course, we can invent vaccines. We should also stop messing around with the environment. None of these things we are doing.

“We cut down the forest, so the fruit bats have nowhere to go, so they come and eat your fruit, then you eat the same one and get infected. We need to stop going to the fruit bat territory,” he says. “We know the consequences, but we are still messing with it.”