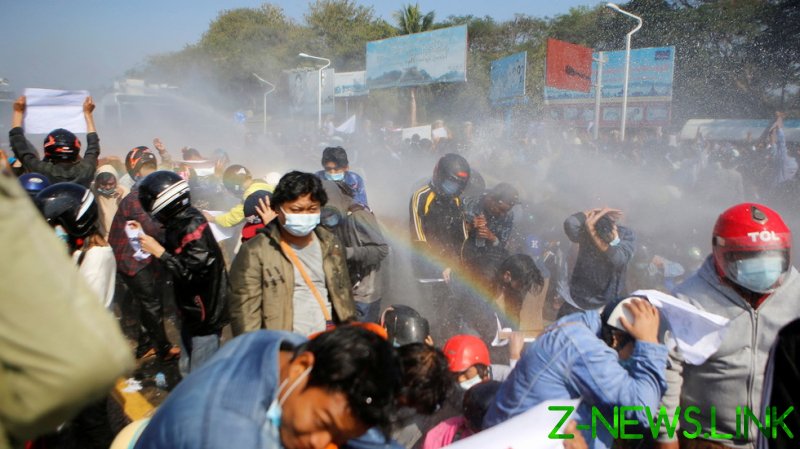 In addition to the call to reverse the takeover, New Zealand said it would not engage with the military government, led by General Min Aung Hlaing.

New Zealand won’t discontinue its aid to Myanmar, but will make sure that the program does not “include projects that are delivered with, or benefit, the military government,” according to the minister. The military officials are to be slapped with travel bans, she added, noting that the restrictions are expected to be finalized in “the coming weeks.”

This comes as tens of thousands of demonstrators have swarmed Myanmar’s streets to decry the newly-imposed military rule, and workers have gone on a general strike in protest.

For a fourth day in a row on Tuesday, protesters hit the streets of several cities across Myanmar to vent their frustration with the detention of Suu Kyi and other civil officials. The demonstrators defied restrictions limiting gatherings to five people imposed on several areas of Yangon and Mandalay, the country’s biggest cities.

While rallies sweeping through the county have been predominantly peaceful, it has reportedly come to arrests as protesters faced off with police in Mandalay.

Tensions have been running high in the capital, Naypyidaw as well, where police have deployed several water cannons in a bid to disperse the crowd of those opposing the military rule.

Several people have apparently been injured in the showdown, with footage on social media showing demonstrators being treated on the scene.

In his first address after the February 1 coup on Monday, General Min Aung Hlaing pledged to hold a new election to cede power to a civil government so that Myanmar can become a “true and disciplined democracy.” While the military previously declared that a state of emergency would be imposed for a year, the general did not provide a timeline for the election.

The military accused Suu Kyi and her allies of rigging the November election, from which her National League for Democracy Party (NLD) emerged as a clear victor. The military also heaped scorn on election officials, saying they failed to investigate alleged widespread voting irregularities.

1991 Nobel Peace Prize laureate Suu Kyi – Myanmar’s state counsellor – and dozens of other high-ranking civil officials have been detained in the military crackdown. Suu Kyi is set to remain under house arrest until at least February 15 after police said they found non-authorized walkie-talkies at her home.