Home / economy / New data on inequality in Russia were horrified: the poor are difficult to feed

New data on inequality in Russia were horrified: the poor are difficult to feed 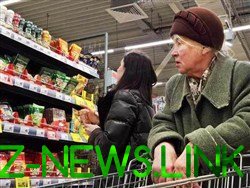 For food leaves half of the revenues

To buy the products for the Russian population becoming overhead. Over the past five years, the share of spending on home food has increased by 5.6%, found out the experts of the Analytical center (AC) to the government. Most spending on the existence of a hit on the wallets of the poor and the wealthy Russians, in contrast, their spending on food reduced. Another paradox is that the rich have less to spend on education and the purchase of non-food goods, while the poor, on the contrary, this consumption is increased. However, to acquire the necessary gadget, needy citizens have to save, and they “donate” the purchase of alcohol. That’s just such a tendency is not talking about sobering up of the nation, and that people barely have enough money for necessary in the modern world things.

Every fifth poorest Russians in Russia spends nearly half their income (48%) on food. Such data ATS results by 2018. Five years ago, in 2013, life was easier: to food has gone “only” 43% of available funds. But for the rich, nothing has changed over the years: then and now, they were spending about 20% of incomes on food, and the rest disposed of, as your heart desires.

Analysts also called the amount that the citizens of different income categories spend on food. It turned out that one member of poor families on food takes 2.8 thousand rubles a month. In wealthy households to 7.7 thousand rubles from the nose. The figures seem unrealistic: we all know that two or three thousand you can easily spend in one trip to the store is the most economical segment. And then people a month live on this amount!

However, in no need of Russians for the year reduced share of spending on non-food goods from 47% to 41% in the income structure. At the same time, the poorest citizens spending on such goods increased from 27% to 29%. However, the increase in expenses was not due to income growth, and savings on alcohol and transport services, as follows from the data of ATS. However, some poor people are going the other way: they take out loans and borrowing money to spend on the necessary non-edible products.

In these statistics no economic contradictions, expert says “International financial centre” Vladimir rojankovsky: “the higher a person income, the smaller the share of the these are the costs for the maintenance of life — food, transport and utilities”.

At the same time for the poor to purchase non-food items are a real problem. “Many people today carelessly use the opportunity to get fast and easy loan, for example, in microfinance institutions. Therefore, there is a growing demand, partly due to the poor population: in developed countries a loan to paycheck is normally used in an extreme case, and in Russia from-for unwillingness to consider the real cost of these loans the population is gaining the loans, although they cannot then serve. This further exacerbates the gap between rich and poor,” adds senior analyst of the “Expert Plus” Maria Salnikova.

With regard to specific amounts spent on non-food needs (transport, fuel, household equipment, furniture, medicines), then poor it takes an average of 1.6 thousand rubles per person per month, and the richest 16.6 thousand rubles.

It is remarkable that despite the paucity of their income the poor do not spend money on education, and the rich, on the contrary, the cost of training decreased over the past five years. However, the research did not include paid education abroad, which the poor themselves clearly can’t afford.

The portion of bad news added to Rosstat. According to the Agency, in 2018 the family broke the record of the last years and spent more on consumption than earned. The gap is small, only 0.7%, but the fact alarming. According to the same Rosstat, in 2014 the income of the population fell by 11%. While food, clothing, appliances, utility services and transport is not cheaper. In our country becomes more and more difficult to live on available funds. And the cause is not the profligacy of the population, and the stagnation of the economy and the inability of it to adequately make.