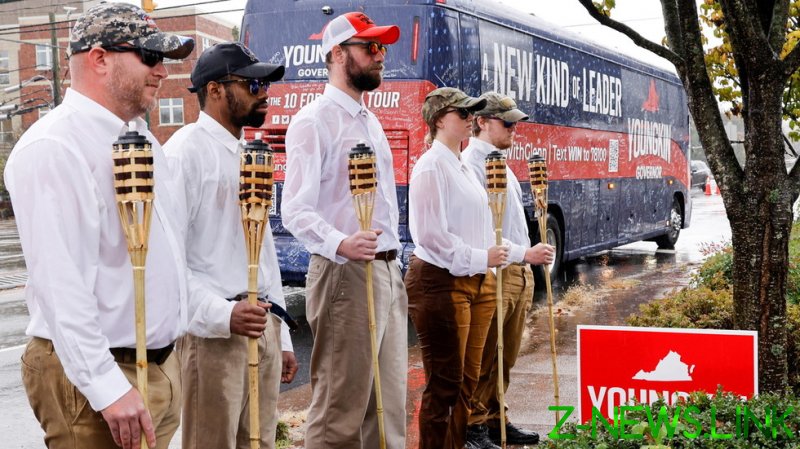 The election has gone from a sure thing for Democrat Terry McAuliffe to a possible upset by Republican Glenn Youngkin in recent weeks. On Friday, as Youngkin came to Charlottesville for the final campaign push, reporters were drawn to a group of people posing in front of his bus in pouring rain. All five wore hats, sunglasses, white shirts, khakis and tiki torches – in what seemed to be a reference to the 2017 ‘Unite the Right’ rally that ended in violence.

Local and national media dutifully reported that the group said “what sounded like, ‘We’re all in for Glenn’” as they posed outside the bus. The report was then amplified by McAuliffe’s staffers: Christina Freundlich said “this is who Glenn Youngkin’s supporters are,” while Jen Goodman called it “disgusting and disqualifying.” Both tweets have since been deleted.

When asked about it, Youngkin said, “I think they work for Terry McAuliffe, and I’m sure he sent them,” adding that the Democrat will “do anything to win.”

McAuliffe’s campaign issued a statement denying the claim. “This was not us or anyone affiliated with our campaign,” they said, adding it was “shameful and wrong” to accuse them of this.

Then internet sleuths went to work, alleging that the people in the photo were actually Democrat activists. Following the claims, the suspected activists began locking and purging their social media profiles, one after another. According to one social media user, the fact that the media themselves showed zero interest in identifying the so-called racists was suspicious on its own.

“This gross false-flag operation reeks of desperation from the McAuliffe camp who is currently trailing Youngkin by 8 points,” tweeted Alec Sears, a conservative political consultant.

He proceeded to claim that two people in the photos – a man and a woman – looked like staffers with Virginia Democrats and Virginia Young Democrats. Both quickly scrubbed their social media accounts. So did a black Democrat activist, who was accused of being part of the stunt.

The presence of a black man amid the alleged “white supremacists” quickly made ‘Jussie Smollett’ and ‘Clayton Bigsby’ trend on Twitter. The former is the actor awaiting trial for allegedly fabricating a hate crime against himself and blaming Republican supporters. The latter is a ‘black Klansman’ character created by African-American comic Dave Chappelle.

It was at this point that the Lincoln Project – a controversial outfit run by former Republican strategists who have disavowed their party and gone all-out for Democrats – admitted the stunt was their doing, calling it a “demonstration” to remind Virginians who Youngkin supposedly really is.

Their admission did not ring very convincing, however, and still left unanswered the question of the identity of the people involved in #TikiGate – with the Democrats categorically denying it was their staffers.

After spending the entire day amplifying the stunt, McAuliffe’s campaign issued a statement condemning it after the Lincoln Project came forward.

“What happened today is disgusting and distasteful and we condemn it in the strongest terms. Those involved should immediately apologize,” said campaign manager Chris Bolling.

The Lincoln Project definitely did not act alone – as Lauren Windsor, a political operative with a pro-Democrat outfit called American Family Voices, admitted she worked with them “to coordinate” the stunt in order to “defend our democracy from rightwing extremists.”

The tiki-torch getup was clearly meant as a reference to the August 2017 ‘Unite the Right’ rally which ended in a riot. President Donald Trump, who has endorsed Youngkin, was accused by the media and Democrats at the time of supporting the “Nazis.” President Joe Biden made that claim central to the story of why he decided to run against Trump in 2020. Trump in fact unequivocally condemned the neo-Nazis, as well as the man who ran over one of the counter-protesters, killing her.

McAuliffe began his campaign comfortably in the lead, but Youngkin has caught up in recent days. One poll is showing him eight points ahead among likely voters, while another shows him four points in the lead. Not even appearances by Biden and former President Barack Obama in recent weeks could turn the tide, so McAuliffe increasingly turned to accusing Youngkin of racism and bigotry.

The Republican’s surge appears to be related to his opposition to mask mandates and critical race theory in schools, an issue that has exploded to the fore in recent months.

“Charlottesville is not a prop. Our community is still reeling from years of trauma — especially this week,” she tweeted. “Don’t come back,[Project Lincoln]. Your stunts aren’t welcome here.”