Home / sports / Nadal and Garcia – Champions of the tournament in Beijing

Nadal and Garcia – Champions of the tournament in Beijing 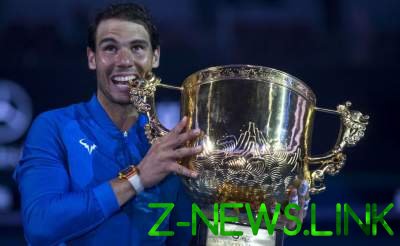 Nadal on the “China Open” issued 75-th title in his career and sixth of the season, and the Spaniard has won six of the last finals in Monte Carlo, Barcelona, Madrid, Roland Garros, US Open and in Beijing.

The final match for Nadal, has suddenly become a cakewalk – the first racket of the world for a half hour defeated nick Kyrios (6:2, 6:1) and took revenge for the Aussie for the recent defeat at the tournament in Cincinnati.

Nadal for the second time won the “China Open”. Winning the tournament gave the Spaniard 500 points and 663 thousands of dollars in prize money.

Caroline Garcia followed with a sensational victory in Wuhan took the title in Beijing. In the final, the French defeated the first racket of the world Simona Halep (6:4, 7:6). In one of the games in the middle of the second set, Garcia played nine break points.

Thanks to the victory in Beijing Garcia Monday will rise to a record ninth row in the WTA rankings and become the first racket of France. Along the way, Caroline will enter the top 8 Championship race WTA.

The title of “China Open” brought Caroline Garcia 1000 ranking points and $ 1.1 million in prize money. The French won the fifth title in his career and second of the season.