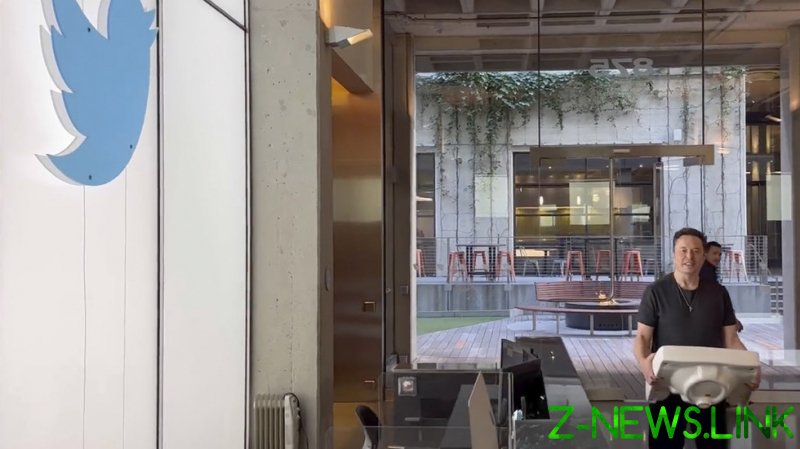 Tesla and SpaceX CEO Elon Musk has denied reports that he intends to implement sweeping staff cuts at Twitter as he prepares to close a $44 billion agreement to purchase the site, according to a company employee and other sources cited in the media.

After paying a visit to Twitter’s San Francisco headquarters on Wednesday, Musk was reportedly “swarmed by about 40 people” as he ordered coffee at a nearby shop, an unnamed Twitter employee told Insider. Asked about a recent Washington Post report that he planned to fire a whopping 75% of the site’s staff, Musk said he “didn’t know where that number came from.”

The entrepreneur took to social media soon after his stop at Twitter’s office, sharing a video of himself carrying what appeared to be a bathroom sink through the building’s main lobby while appending the caption “Entering Twitter HQ – let that sink in!”

Hours later, he followed up the visual pun with a more conventional post for a prospective owner, saying he was “Meeting a lot of cool people at Twitter today!”

One of the world’s richest men, Musk is expected to close out the deal to buy the platform as soon as Friday, after months of wrangling with Twitter due to a dispute over the number of bots and spam accounts on the site. Twitter had also filed a lawsuit after Musk appeared to backtrack on his initial offer, seeking to force him to complete the purchase. However, the company halted the suit earlier this month on the condition that Musk buy the platform by October 28, with a judge stating that a trial would be initiated against him should he fail to go through with the agreement.

Having already changed his personal Twitter bio to “Chief Twit,” Musk is expected to formally address company staff for the first time on Friday, according to sources cited by Bloomberg.

The Washington Post report which alleged that Musk plans a mass-culling of Twitter’s 7,500 workers relied on “corporate documents and interviews with people familiar with the company’s deliberations,” but did not cite any sources on the record. Both Musk and Twitter declined to comment on the report, though the billionaire recently blasted the Post as “hypocrites” following a string of critical articles about him.