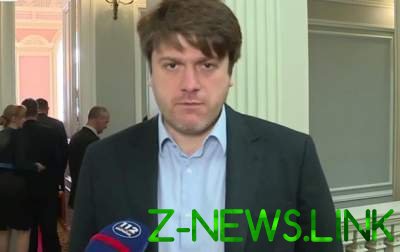 The guards would not let the Deputy abroad, to enforce the judgment.

The people’s Deputy from Blok Petro Poroshenko, Secretary of the Verkhovna Rada Committee on national security and defence Ivan Vinnik filed in the District administrative court of Kiev the claim to the state border service.

The MP is trying to challenge the actions of the border guards, who, fulfilling the definition of Appellate court of Kiev not releasing it abroad until full repayment of UAH 350 million debt to the Bank.

At the moment, the debt winnik is repaid through the enforcement of 20% (about 3 500 UAH per month) from the wages through the Verkhovna Rada.

The session of the lawsuit, the scandalous Deputy of the debtor vinnika is scheduled for September 8. The case will be considered by judge G. P. O.

It is noted that Ivan Vinnik almost a year trying to reverse the decision of the Appeal court of Kiev, turning in all the courts that have denied him and left him a ban to leave Ukraine in force. Until 2016 winnick, who had previously been ranked among the most poor people’s deputies actively visited European countries: Italy, Switzerland, Austria, France. He also visited Russia, however, with what purpose, failed to find out.

Executive proceedings to recover the debt from vinnika in front of several Ukrainian and international banks is about three years. The total amount of debt 377 million.

Earlier media also reported that winnick is a close ally of Sergei Pashinsky – managed to re-register all property on relatives and parliamentary assistants and even to divorce his wife. Now MP lives in the mansion of Sergei Pashinsky on Lipsky 19/17, where the office of the popular front.

At the beginning of last year, the performers managed to find and arrest boats winnick, as well as to sell through auction an electronic auction SETS the BMW MP.

In 2016, the NEB is interested in the Declaration of the MP, in which he “forgot” to indicate the possession of shares in the company Asia foods, LLC Uzbektheater, specializing in the wholesale and export of agricultural products, and under “financial liabilities” are not indicated 3.4 million of debt for the outstanding loan to Ukrsotsbank, and nearly 26 million 110 thousand euros of outstanding three loans to PrivatBank.