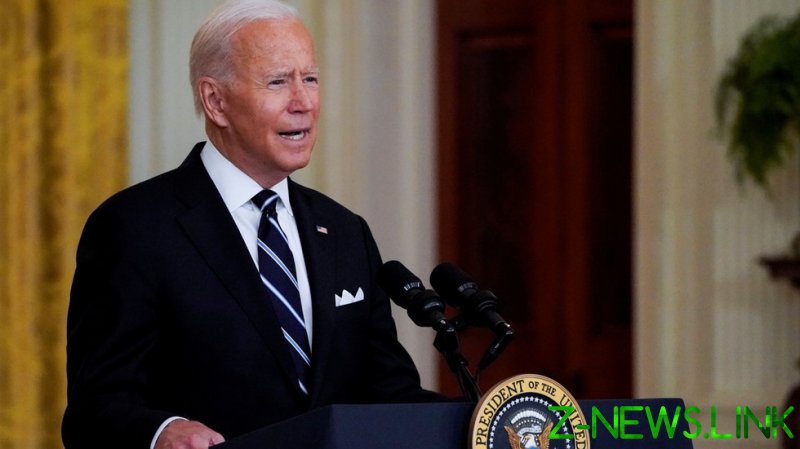 Nearly six in ten (58.6%) Americans polled over the weekend believe the president lacks “constitutional authority” to force private businesses to mandate that employees receive vaccination against Covid-19, according to the Trafalgar Group, which published the results of its survey on Monday. Just 29.7% argued he did have the authority, while 11.7% were unsure.

The White House plans to roll out the vaccination mandate announced last week through the Occupational Safety and Health Administration, a subsidiary agency of the Department of Labor. Under the proposed rule, any business with 100 or more employees must require its workers to be vaccinated or receive weekly Covid-19 testing. The mandate is expected to affect as many as 100 million Americans.

Opinions regarding the president’s authority or lack thereof were strongly split along party lines, with 54.9% of Democrats agreeing Biden did in fact have the power to order private businesses to demand their employees be vaccinated. Among Republicans, however, 83.5% believed the president was overstepping his authority, and more than two thirds of independents and those with no party affiliation (68.2%) agreed Biden lacked the ability to make such demands.

Similarly, the vast majority of Republicans – 79.5% – believed the vaccine mandate set a dangerous precedent that “could be abused by future presidents on other issues,” an opinion shared by 58% of non-affiliated voters and even 30.4% of Democrats. The majority of those hailing from Biden’s party, however (54.4%), did not believe the mandate would be abused by future leaders.

Biden’s announcement on Thursday regarding the pending vaccine mandate has polarized the nation, with even many fully vaccinated Americans balking at using government muscle to force a controversial medical treatment on unwilling individuals. Several Republican governors have vowed not to enforce the mandate, a show of defiance which won support from 55.1% of the poll’s respondents. Some 40.1% opposed the governors’ efforts to block Biden’s mandates, however. Party affiliation heavily predicted whether one supported or opposed the dissident governors, with the majority of unaffiliated voters (62.3%) also supporting the governors who had vowed to block the mandate.

No timeframe has yet been unveiled for the mandate to take effect, though the White House has hinted OSHA will deliver the order “in the coming weeks.” There has been little discussion of exemptions, medical or otherwise, and the matter of who will be expected to pay for weekly testing for those who refuse vaccination remains up in the air. Companies that fail to heed the mandate have been threatened with enforcement fees of $14,000 per violation.

Conducted in partnership with the Convention of States Action, the poll surveyed 1,098 likely general election voters.