Home / WORLD / Minneapolis rioter FORGETS NAME of man on whose behalf he’s rioting … Once reminded, he declares on camera, ‘REMEMBER THAT NAME’

Minneapolis rioter FORGETS NAME of man on whose behalf he’s rioting … Once reminded, he declares on camera, ‘REMEMBER THAT NAME’ 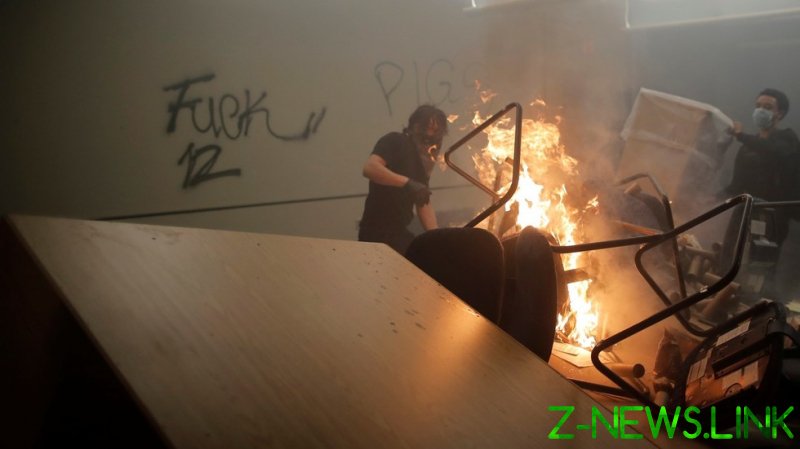 If the scene wasn’t already dystopian enough, the suspected criminal who was fatally shot by police on Thursday was Winston Smith, which happens to be the same name as the protagonist in the George Orwell novel “1984.”

A video of the strange encounter at Thursday night’s riot in Minneapolis began with the unidentified man saying from off camera, “Stay here, show, like, hold that space, obviously for, I’m not gonna lie, I forgot his name.” Another voice, apparently belonging to a journalist with alternative media outlet Unicorn Riot, then said, “Winston Smith.”

The man then thanked his interviewer and agreed to go on camera. “Just so you all know, the person that was shot up in there, his name is Winston Smith,” he said. “Don’t forget that name, Winston Smith. Say his name, and make sure y’all remember this s**t because we’re going to fight for him just the same f**king way we fought for George Floyd.”

The damage toll was especially heavy in Minneapolis and neighboring St. Paul, which suffered the second-most destructive civil unrest in US history, ranking behind only the 1992 Rodney King riot in Los Angeles.

Smith, a 32-year-old black man, was shot on Thursday as members of a US Marshals task force tried to arrest him on a felony gun charge. He had called for “war” after Floyd’s death and shot at marshals from inside his vehicle as they tried to apprehend him.

Smith also encouraged rioters to burn police stations amid the unrest, saying in one of his posts: “Just never let another police station survive in your neighborhood.”

Smith reportedly had 20 prior arrests on his record and was on probation for a 2017 aggravated robbery conviction, which left him unable to legally possess a firearm. “We got guns and bulletproof vest, too, or should be able to get ’em,” he said on Facebook after Floyd was killed. “Why not just rush these f**ks and start this war they keep asking for?” Smith wrote.

After the Smith shooting, rioters in the city’s Uptown neighborhood vandalized buildings and looted businesses, police said. A dumpster was set on fire in the street.