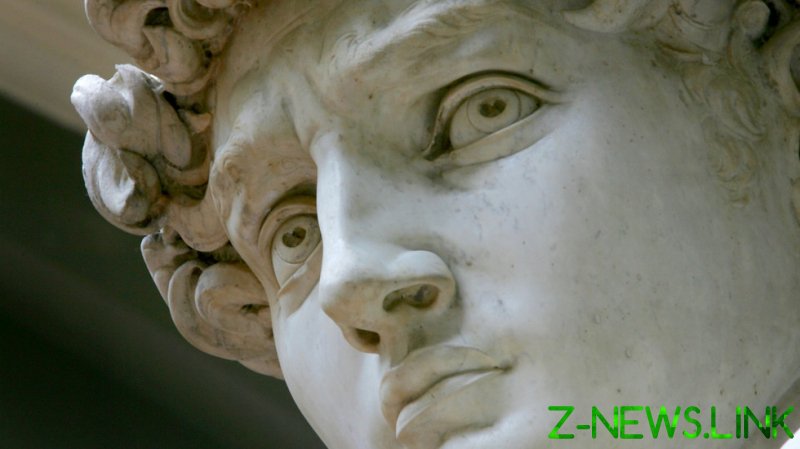 The 17-foot resin replica, manufactured from laser scans of the sculpture and coated with marble dust, was apparently intended to be displayed unobstructed, just like the original masterpiece, which resides at the Accademia Gallery in Florence, Italy.

However, the organizers of the international trade event – held over from last year due to the pandemic – chose to position the Italian pavilion’s 5.17-metre-tall (17ft) statue in a cylindrical glass and stone chamber ranging over two levels. And to cover its private parts with a large stone slab.

According to the Italian newspaper La Repubblica, the initial unveiling of the statue – in all its masculine glory – to VIP guests had caused them “enormous embarrassment.” The conservative Gulf country has strict Islamic laws banning public nudity.

“It was an error to bring a statue of a nude man to the Emirates,” an unnamed source who worked on the project told the publication.

However, the decision to conceal the statue’s genitalia prompted criticism over censorship from some in the art world. Describing the covering-up as “grotesque and ridiculous,” Italian art critic Vittorio Sgarbi, cited by the Adnkronos news agency, accused the organizers of trying to “erase” a piece of the work.

“[The statue has] a biblical theme, not a pagan theme. Therefore, ‘erasing’ a part of Michelangelo’s David at the Dubai Expo is simply bowing to their religion and culture,” Sgarbi said, adding that it was an “unprecedented, unacceptable, intolerable humiliation.”

But Davide Rampello, the pavilion’s art director, said the decision as to how to proceed had been a “unique approach,” and rejected accusations about government censorship.

“It is a different perspective, which is new, introspective, and moving,” said Rampello, noting that visitors to the lower level of the chamber would be able to see the statue in its entirety. The event organizers have reportedly restricted entry to that level to VIPs.