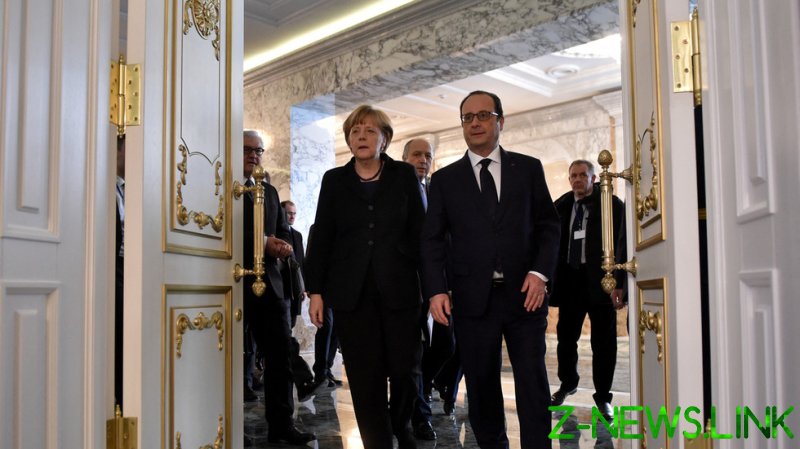 Former German Chancellor Angela Merkel has once again confirmed that the 2014-15 Ukraine peace deal she helped arrange was meant to allow Kiev strengthen its armed forces.

The Minsk accords, brokered by Germany, France, and Russia, were meant to stop the fighting in Donbass and create a path for the region’s peaceful reintegration into Ukraine. Kiev promised to enact constitutional reform that would grant autonomy to the Donetsk and Lugansk People’s Republics. The deal, however, was never implemented, as Ukraine argued over the interpretation of the agreement.

“The 2014 Minsk Agreements represented an attempt to give Ukraine time,” Merkel told Italian magazine Sette on Tuesday. “Ukraine has used this time to become stronger, as we see today. The country of 2014-15 was not the same as it is today. And I doubt that NATO could have done much to help Ukraine as it does right now.”

Former Ukrainian President Pyotr Poroshenko said in June that Kiev had used the Minsk accords to buy time to rebuild its military and economy. Merkel made a similar point this month, describing the agreements to Die Zeit newspaper as an attempt to allow Ukraine to “get stronger.”

Moscow cited Kiev’s failure to implement Minsk as one of the reasons it launched its military operation in the neighboring state in late February. Russian President Vladimir Putin said that Merkel’s words demonstrate that “they were also lying to us and only wanted to pump Ukraine with weapons and get it prepared for a military conflict.”

Merkel’s view on the Minsk agreements was also criticized by Serbian President Aleksandar Vucic, who described the revelations from her Die Zeit interview as “unbelievable.” Vucic promised to draw lessons for Belgrade, which in the past has conducted EU-brokered negotiations with the breakaway region of Kosovo.