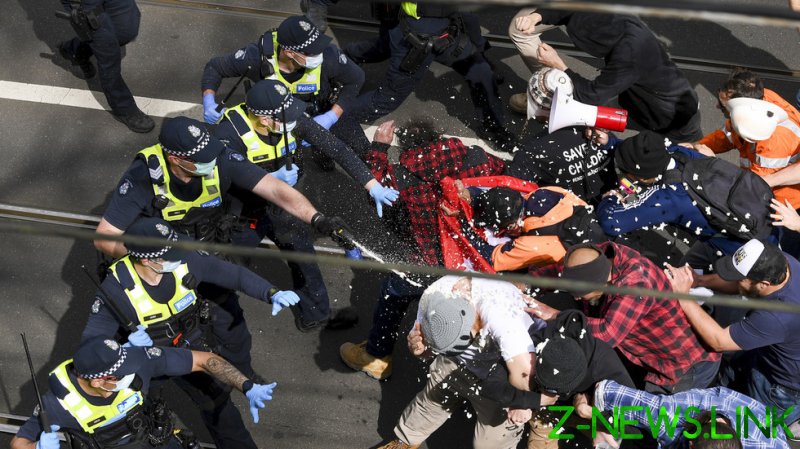 Currently in its sixth lockdown since the beginning of the Covid-19 pandemic, Melbourne has now officially become the lockdown champion – this is according to local media, which reported that the city has spent a total of 235 days in lockdown, surpassing the benchmark set by Argentina’s Buenos Aires, which was shut down for 234 days last year.

The mood has been far from celebratory in the streets of the locked-down city, however, as it faces a wave of protests against the record-breaking restrictions. Since Monday, demonstrators have been taking to Melbourne streets daily to vent their frustration at the government’s handling of the pandemic, including at its latest move to impose a vaccine mandate on construction workers.

The authorities’ decision to shut down construction sites starting Tuesday to punish traidees for defying the mandate added fuel to the fire, and saw Wednesday’s rally spiraling into full-blown clashes with police.

Police deployed tear gas and rubber bullets in an attempt to disperse the protesters, some of which threw bottles and other projectiles at law enforcement. Around 200 people were arrested in the wake of the unrest.

Victoria police faced accusations of an attempt to cover up the scale of the crackdown, after it declared a no-fly zone over an anti-lockdown march. Officials backtracked and allow media helicopters to hover over the protest only after the ingenuitive tactic sparked complaints from media.

Victoria’s Premier Daniel Andrews chalked up the unrest to agitators, arguing that the protest was hijacked by provocateurs who wanted to incite violence.“They’re there to pretend to be protesting,” he claimed on Tuesday, while denouncing the events as “appaling.”

Although Australia has given up on its “Covid Zero” strategy, states of New South Wales and Victoria are still living under stringent lockdowns, which will only be slightly eased after 70 percent of the eligible population there are fully vaccinated. The states hope to reach this target not until the middle of October.

So far, the attempts to stop the spread of the virus by extending lockdowns has returned mixed results. Victoria saw its biggest daily increase in infections on Thursday reporting 766 cases, which brought the number of total active cases in the state to 6,666. New South Wales, which includes Sydney, reported over 1,063 new cases over the last 24 hours.