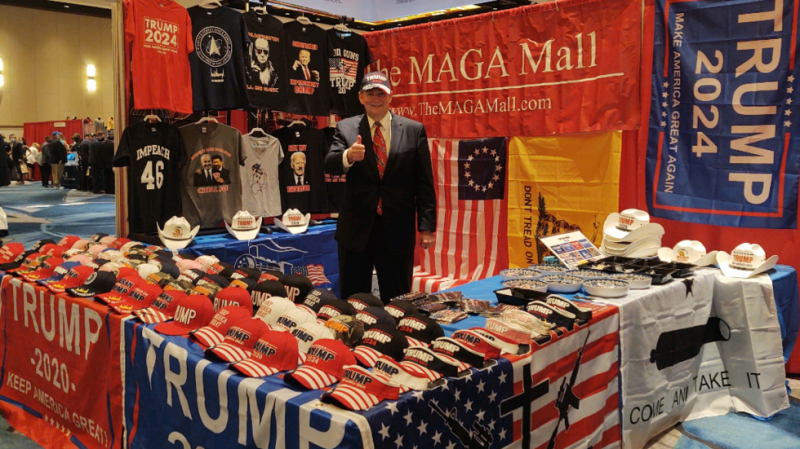 Ronald Solomon is a mirror image of the man who’s the face of his business, Donald Trump. They talk alike, think alike, love a deal, come from New York … and both are presidents.

Solomon, who now resides in Las Vegas, is president of the MAGA Mall, which designs, produces and sells an ever-expanding range of Trump merchandise. He is permanently criss-crossing the US to follow Trump or attend conferences.

The popularity of his business is astonishing; in a single month, it ships no less than 20,000 hats, with the top seller the ‘classic’ red MAGA cap. Trump’s fondness of his own version has been the perfect advertising and is one reason why MAGA Mall’s annual turnover is in the millions.

Speaking to RT.com, Solomon, 61, doesn’t hold back in his praise, saying, “Trump has turned out to be a great president. We’re very lucky to have him. He didn’t put up with any nonsense to get things done.”

Despite Trump leaving office, the appetite for MAGA gear is substantial. Solomon was at the recent Conservative Political Action Conference (CPAC) in Florida and described demand as “unbelievable.”

He continued, “I get calls from all over the US wanting the products, from state and county Republican parties, gun stores and other retailers that I wholesale to. My website has exploded.”

This can be partly attributed to the product list, which is extensive. He makes flags, banners, visors, face masks, mugs, greeting cards, T-shirts, jewellery, pins, bumper stickers and even a teddy, Trumpy Bear. A willingness to react to events helps, too.

“I immediately change my products and adapt with what’s going on; I had Trump 2024 hats in production a week after the election,” he explained. “The red MAGA hat has always been a big seller, but now Trump 2024 with the American flag on the bill is also doing well.” A sign of what’s in store at the next election, perhaps?

While Trump has no official connection to the MAGA Mall, he does like its style, as was seen when the Lieutenant Governor of Louisiana Billy Nungesser greeted a smiling 45th president wearing a pair of Ronald’s socks, which have a comedy swathe of material depicting Trump’s combover.

The spark for the idea for the business came when Solomon tried to buy Trump hats for his staff at a non-profit organization he operated called US Patriots. He needed 50, but was dismayed at what was on offer.

Solomon explained, “They were expensive and the quality wasn’t great, so I had 144 hats made so I could get a good deal. I picked out prime quality cotton twill and the thread, with big letters [reading] ‘Make America Great Again’ on them. I sold the others and people wanted other colors, so I started making those and it grew into this.”

But it hasn’t all been plain sailing. Just like Trump, Solomon has attracted criticism, with the MAGA Mall’s line of dictator T-shirts coming under particular fire. This features a range of Democrats, including Joe Biden, depicted with a small mustache, comparing them to Adolf Hitler. Media reports saw Solomon flooded with hate mail and he has left Twitter – as has Trump, albeit involuntarily – and now uses conservative social media platform Parler.

But he is robust in his defense. “I don’t think those T-shirts go too far at all,” he said. “Those are great sellers. Look at what the Democrats have been doing. If you really think about it, they’ve been calling Trump Hitler for four years now. But Trump is for freedom of speech, assembly rights and to keep and bear arms – he is against massive socialism.”

While clearly a colorful character, Solomon does have an agenda. Part of the proceeds from the MAGA Mall are redistributed to Republican candidates and he claims that has had an impact on election results.

He said, “I know for a fact that there were many close elections and because the Trump products raised money and got more awareness out, they were instrumental in getting more Republicans elected.

I look for close races and I either donate products so they earn money that way, or I’ll give them the money directly. We have a one-time opportunity because of the popularity of Trump to raise a tremendous amount of money for the party.”

Despite Trump’s departure from the limelight, Solomon believes the public reaction to the Biden administration is driving demand for his merchandise. During our chat, he had five separate inquiries to sign off new orders, and he is currently developing new lines, including cowboy hats and fresh flags.

As with Trump, he’s fiercely proud of his work ethic and admitted, “I’ve only had one day off since February 1992 and that’s because I was sick.”

Plus he’s not short of confidence and is in no doubt his offerings are the best around. “Most of my hats and T-shirts are knocked off by my competitors, but they are not as good, as all my products are designed by me using only the finest materials,” he smiled. “The others don’t even come close.”

A sentiment his idol would surely agree with.