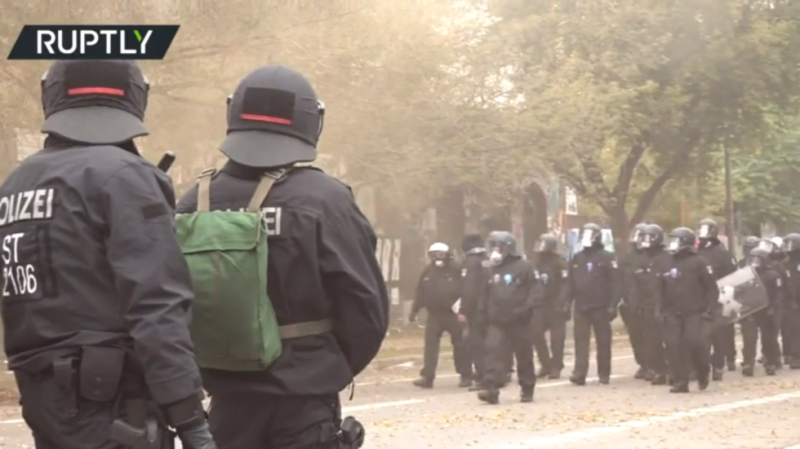 The “autonomists” living inside the housing project on 137 Kopenicker Street – commonly referred to as ‘Kopi’ by Berliners – in the center of the German capital had been fortifying their camp during the week, including placing barbed wire on top of the walls, ahead of the planned eviction on Friday.

They vowed to defend their home and stage protests elsewhere in Berlin, but this wasn’t enough to stop law enforcement from moving against yet another illegally occupied property in the city.

Some 2,000 officers have taken part in the operation, with some of them storming the trailer camp and the rest preventing possible provocatory acts in other parts of Berlin.

Early in the day, police in full riot gear bearing protective body shields cornered off the area and attempted to make their way inside the trailer camp.

Footage by RT’s Ruptly video agency has captured a police armored vehicle being used to ram the walls of the makeshift fortress, but failing to break through.

Meanwhile, the masked defenders of the camp threw projectiles at officers and burned flares, while playing music and shouting obscenities at them through a loudspeaker.

The police then brought in two siege towers made of metal rods in order to start dismantling the barricades from the top.

The ‘castle’ fell only after the officers weakened a part of the wall with buzz-saws and tore it out with a towing wire attached to an APC.

After that, the police made their way into the hole in the barricade and soon started emerging, escorting Kopi’s inhabitants outside. Multiple arrests have been made.

Members of Berlin’s radical-left scene have been squatting at Kopenicker Street since the 1990s and were even able to legalize their presence on the property. But the building had been auctioned, and this June the judge ordered it to be evicted.

The Kopi was one of the last major left-wing squats in Berlin after the police removed illegal occupants from a building in Liebig Street and shut down the Mutiny and the Syndikat clubs over the past two years.