Home / WORLD / ‘Measure how far US is from the South China Sea’: Global Times editor shuts down Pompeo for noting China’s distance from Arctic

‘Measure how far US is from the South China Sea’: Global Times editor shuts down Pompeo for noting China’s distance from Arctic 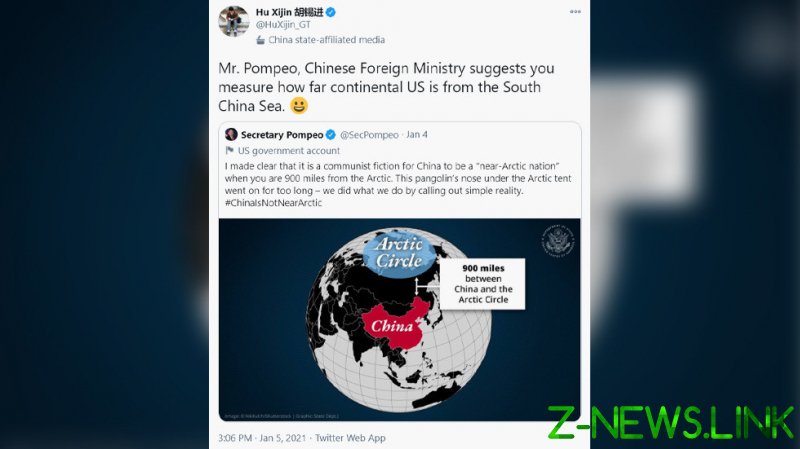 On Sunday, Pompeo provoked China on the subject by tweeting: “I made clear that it is a communist fiction for China to be a ‘near-Arctic nation’ when you are 900 miles from the Arctic. This pangolin’s nose under the Arctic tent went on for too long – we did what we do by calling out simple reality.”

Global Times editor-in-chief Hu Xijin shot back at Pompeo on Tuesday, however, politely suggesting that the secretary of state “measure how far [the] continental US is from the South China Sea.”

Since 2018, China has publicly maintained that it is a near-Arctic state and “an important stakeholder in Arctic affairs” – a claim that the US has rejected.

Currently, the international Arctic Council consists of the United States, Canada, Russia, Norway, Sweden, Finland, Iceland, and Denmark. China is only considered to be an “observer” state, along with countries like the United Kingdom, Poland, Germany, Japan, and India.

The United States has repeatedlyantagonized China by trespassing in its claimed waters and exercising its military might in the disputed South China Sea as part of its “freedom of navigation” operations – despite the fact that the South China Sea is thousands of miles away from the continental United States.

Over the past year, social media has quickly become the new arena for skirmishes between the Chinese media and US officials, with Hu Xijin and China Daily EU bureau chief Chen Weihua serving as two of the most notable online defenders of China.