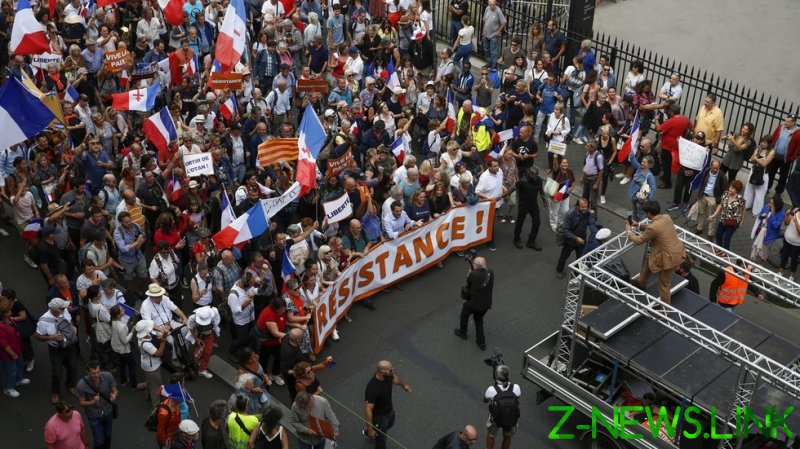 A massive crowd of protesters marched through the center of the Paris on Saturday demanding that France radically change its stance on NATO and the EU.

The march was organized by the right-wing Les Patriotes (The Patriots) party led by Florian Philippot, the former deputy head of Marine Le Pen’s National Rally. Dubbed “the national meeting of resistance,” the rally attracted “thousands and thousands” of people, according to Philippot, who was also a member of the European Parliament between 2014 and 2019.

The demonstrators were holding a large banner reading ‘Resistance’ and smaller placards that read ‘Frexit’ – a reference to a demand that France leave the EU. Many protesters were also waving the national flag.

According to videos published by Philippot on social media, the crowd was chanting: “Let’s get out of NATO!” They also demanded the ouster of French President Emmanuel Macron as they marched near the parliament building, the footage purports to show.

The protesters denounced NATO “warmongering,” as well as economic “disruption” and “energy and health restrictions,” linked to the sanctions the EU imposed on Russia over the conflict in Ukraine.

French officials have not commented on the rally and provided no official figures as to the number of demonstrators. The French media mostly ignored the event as well. According to the website of Les Patriotes, similar rallies were also held on September 3 and 17.

The unrest comes as France increasingly struggles to cope with the ongoing energy crunch, a major cause of which is the EU’s sanctions policy. Last month, the head of the French energy regulator CRE warned that private households could face power outages this winter if there are severe cold spells.

READ MORE: Austrians take to the streets over living costs

Le Pen also warned that the nation should brace for a tough winter. The right-wing politician told BFMTV that the sanctions on Russia were not working and were harming the French people instead.