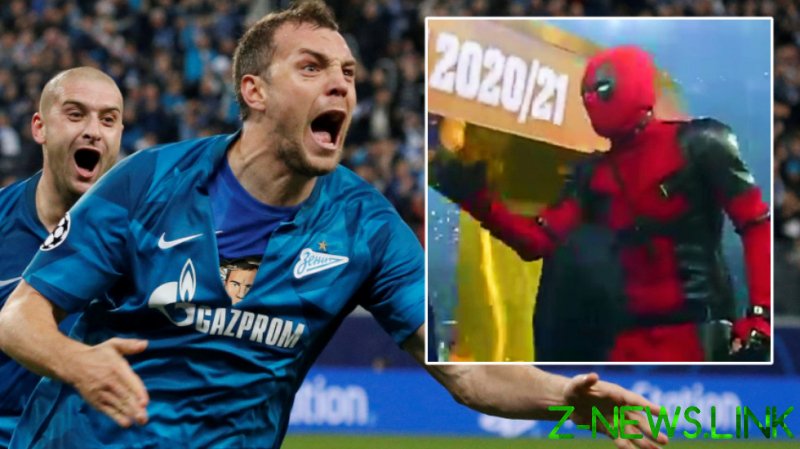 Never shy to make a spectacle of himself, the hitman headed out to the pitch in the eye-catching red-and-black costume of X-Men character Deadpool as Zenit strolled to glory with an emphatic 6-1 win over their nearest rivals, second-placed Lokomotiv Moscow.

The resounding victory created an unassailable nine-point gap over their humbled opponents and meant that Dzyuba and his club lifted the trophy for the third season in a row, quickly slipping in to the full-body costume to shake hands in front of dignitaries on a podium at the celebrating Gazprom Arena.

“Deadpool is regeneration,” explained Dzyuba, speaking to Match TV about the witty mercenary in the film with a quick-healing body covered in scars.

“That’s me. I’ve had this costume for ages – it’s our third title in a row, I can allow myself the chance to wear it.

“I have long wanted to wear it, but during the second championship I did not dare, and during the first there was no time for that.”

Dzyuba has arguably ceded the lead role at Zenit to Sardar Azmoun at times this season, and the Iran forward, who currently has three more than his 16 goals for the campaign, outshone him again with a hat-trick against Lokomotiv.

The captain still played a starring role, opening the scoring in the 19th minute to launch a party that was in full swing by the time Azmoun completed his treble, whch spanned less than ten minutes of the game, shortly after half-time.

Five minutes later, Dzyuba had his second, echoing the result that confirmed Zenit’s title win last season, when he scored once and Azmoun notched twice in a decisive encounter with Krasnodar.

While many fans found Dzyuba’s decision to carry his son to the trophy presentation endearing, others joked about his choice of clothing.

Some suggested that Toni Kroos, the Real Madrid midfielder who has criticized Arsenal striker Pierre-Emerick Aubameyang for wearing a ‘Black Panther’-style mask in his goal celebrations in the past, would not be impressed.

A few tried to alert Ryan Reynolds, the actor behind the costume in the blockbuster film – and, as of February, the owners of English non-league club Wrexham.

“It was a precious thing to win in front of our fans at our stadium,” said Dzyuba. “The atmosphere was amazing.”

Major summer signing Dejan Lovren, who has now won league titles in three countries after his previous successful seasons with Liverpool and Dinamo Zagreb, said he would celebrate with wine and expected fans to follow suit with beer.

“This is what brings me a lot of emotions. That is why I came here – to win trophies with this wonderful club. This is one of my happiest days. Maybe when I moved here, I was a little happier.”

Lovren acknowledged the pressure that Zenit had faced because of their tame exploits in Europe. “We need to rehabilitate ourselves for playing in the Champions League,” he accepted. “That’s our goal. I think we have everything for this.”