Home / WORLD / Many Ls have had enough of the Ts in the alpabet soup LGBTQ ‘community’, now it seems plenty of the Gs want to escape them too 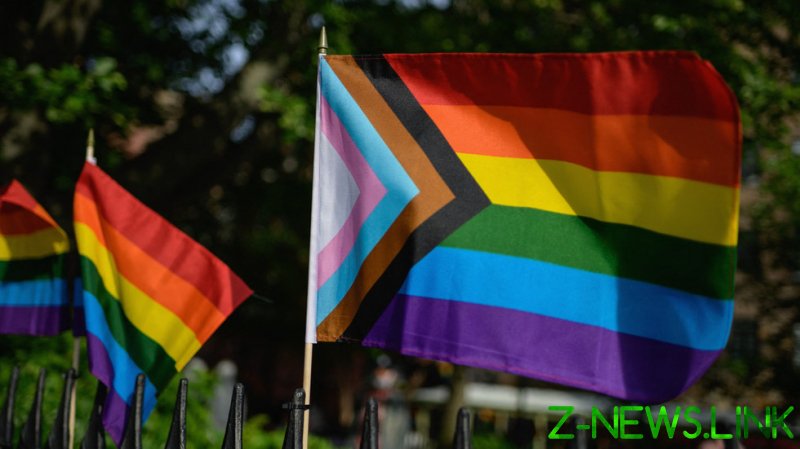 The toxic Ts in LGBTQ have already forced some of the Ls – that’s lesbians – to jump out of that once warm and cosy bowl of alphabet soup. And now it looks like a load of the Gs – gays – have had enough of them too.

Maybe the Ls and Gs are far better off on their own; they’re fundamentally far more compatible as a community.

First off, let’s just have a recap of where we’re at with that alphabet soup. It actually all began in the first place with the Ls and the Gs anyway, as a movement to protect the rights of lesbians and gays. But the rainbow now has so many stripes it’s pretty much every colour under the sun.

It’s as if adding another splash of colour, plopping another letter into the soup, somehow shields all those individuals sheltering under that multi-coloured and multi-faceted umbrella from the petty, silly little foibles and fallouts we all have to endure whenever human beings rub up against each other.

They’re not all sitting happily together in a forever friends group hug though, oh no. It seems this ‘community’ is coming apart at the seams.

Some Ls, for a while now, have had enough of some of those Ts. Especially transwomen, that’s men who now identify as women. They make way too much noise and they dominate way too much of the debate, some lesbians and feminists argue, and therefore get most of the attention and resources.

As Sam Esther, a pen name for a well known American feminist and lesbian activist, told RT.com in February: “In the US it was lesbian and gay liberation or lesbian and gay rights for decades. It wasn’t about identities but about the freedom to love people of the same sex. The B was added in the early 90’s, and the T even later. Most of the resources go to the T. L is on the bottom of the pyramid. I’m a lesbian and I feel alienated from what is supposed to be my own community. There’s no room for women with my lesbian feminist politics. What I feel is the loss of the strong movement and community we had in the 70s and 80s and into the 90s. (I go way back.)

“The LGBTQIA+ movement is actually in the process of splitting. There are now LGB Alliances In the UK, Ireland and the US (that I know of.)”

This deepening rift has been highlighted by an MP in the UK who has just stepped on one of those trans lobby digital landmines that seem to blow somebody apart every other day or so. Rosie Duffield is, rather ominously, being investigated by her Labour Party bosses for liking an ‘anti-trans’ tweet by a gay American rapper.

Some boring and predictable blowhard from LGBT+ Labour (a Labour Party affiliate) has – of course – demanded Duffield be suspended from the party. “This recent endorsement of extremely homophobic and transphobic comments by Rosie Duffield is yet another example in a consistent pattern of behaviour,” screeched Alex Beverley. “The party must demonstrate that it stands with the LGBT+ community and that it will not tolerate transphobia or homophobia from our membership or elected officials.”

Harry Potter author JK Rowling, who herself knows a thing or two about being pursued by the trans mob, offered the MP her support tweeting that in “news that will amaze precisely nobody” she stands with Rosie Duffield – citing a Twitter hashtag backing the beleaguered MP, a thread supported by an ever growing list of lesbians.

Lesbian lawyer Joanna Cherry Tweeted: “Standing up for #womensrights & the right of the same sex attracted to define ourselves as such is not transphobia. It’s time political parties put a stop to this bullying. As a lesbian I’m proud to call @RosieDuffield1 my friend.”

“The baseless smearing of women who do not bow down to this ideology is absolutely disgusting,”added TheFamousArtistBirdyRose. “I will not stand by and let telling the truth become a crime.”

So what did this gay rapper dude say to cause all the fuss then? Well, Kurtis Tripp tweeted: “I’m so sick of hearing about how ‘queer’ has been reclaimed. I had that word spit in my face as recently as 2018. And look at WHO is reclaiming it. Mostly heterosexuals cosplaying as the opposite sex and as ‘gay’. Stop co-opting our language. Stop colonizing gay culture.”

‘Cosplaying’ is costume playing – dressing up as a cartoon, movie character and such like in infinite detail.

And now, guess what? It seems Twitter has suspended Tripp’s account because his opinion goes against the current woke groupthink. Madness. Tripp, on his – still active, thank God – Facebook page identifies as: “homosexual. husband. hella loud. I make music, GC info videos and majorly gay up the place.”

Now, if this gay guy is not allowed to express an opinion on the LGBTQ community – his OWN community, by the way – then… who the hell is?

The rainbow seems to be melting, and some of those colours are dripping away. And it is entirely and absolutely the fault of the mindless trans lobby mob who do nothing but shout people down if they dare to dissent.

Well, okay then. Maybe LGBTQ (forget all those other pointless letters, they go on forever) will, soon enough, simply become BTQ. My bet would be that the Bs – bisexuals – would edge towards the Ls and the Gs too.

So, TQs, you might well be all on your own. Some people into Kink – I don’t know where the Ks stand in that alphabet soup and, quite frankly, I simply don’t care – sometimes go way too far. Add the Ks to the TQs. And you could always add a Z, I guess, for the Zoophiles. People who have sex with animals, they insist they should also be included in the world of pride. The TQKZ community. Awesome. Don’t you just desperately wanna join?

The people who shout the loudest, those that – effectively – demand censorship and suppression and brook absolutely no dissent – need to realise that this is all gonna backfire in the end. Big time.

But, please, don’t throw away those hard-earned gains on this neverending idiocy. Those Ls and Gs and Bs should jump free of that holed and rickety rainbow ship; go your own way. Most people have no time nor interest in the rest of them anyway.