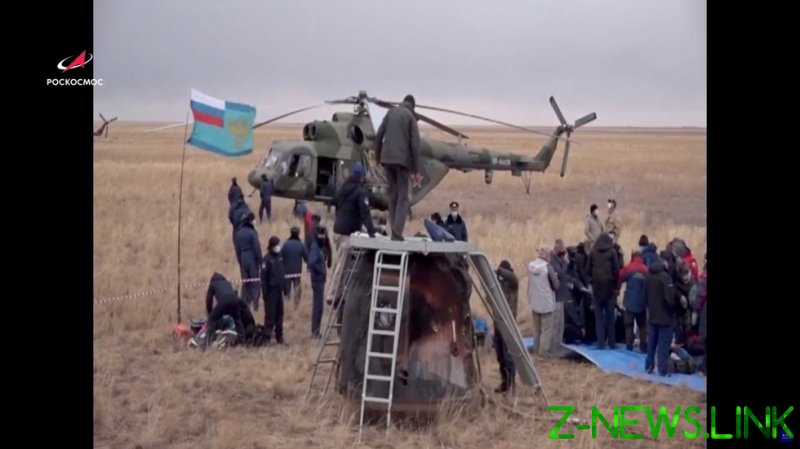 NASA astronaut and Expedition 63 commander Chris Cassidy, as well as two Russian cosmonauts, Anatoly Ivanishin and Ivan Vagner, touched down some 150km (90 miles) southeast of Zhezqazghan, a city in Karaganda Region, Kazakhstan, at 2:54am GMT (around 6am Moscow time) on Thursday.

The descent, which was broadcast by the Russian space agency Roscosmos, went smoothly, with footage showing the Soyuz landing module touching down upright.

The three crew members appeared to be in good spirits as they were examined by medics upon their return. A homecoming ceremony for the crew was reportedly scaled down to minimize risk of potential exposure to diseases, including Covid-19. All members of the welcoming party could be seen wearing masks as they surrounded the returning crew.

Following a short post-flight recovery, the Russian cosmonauts will come back to Moscow. Only family members who took a coronavirus test and are not in the “risk group” will be allowed to meet the space travelers immediately upon their return. Children under 12 and those over 65 could first see Ivanishin and Vagner eye-to-eye after they go through rehabilitation, which can last for up to seven days, according to the Gagarin Cosmonaut Training Center.