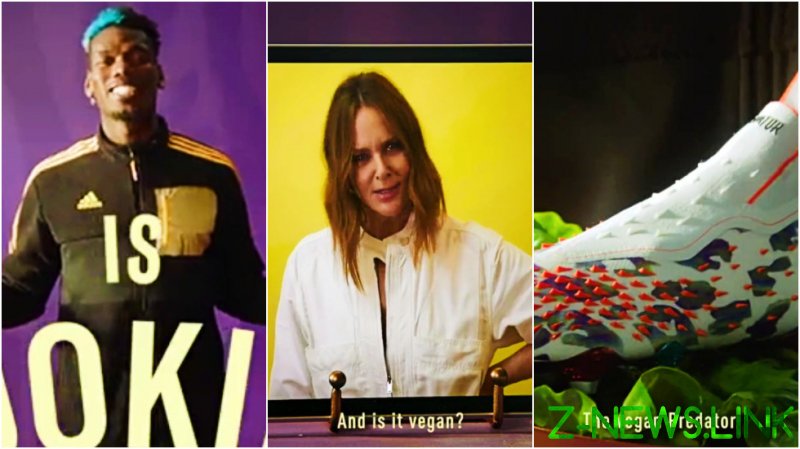 The gender-neutral pair of Adidas Predator Freak boots were conjured up by the World Cup-winner and the daughter of Beatle Paul and late animal rights campaigner Linda during lockdown.

Applied to the latest edition of the iconic Adidas offshoot famously worn by the likes of David Beckham and Zinedine Zidane in their playing days, vegan materials have been used to create the laceless white boots which boast blue and green leopard spots in addition to orange rubber spikes.

On his social media channels, Pogba helped launch the boots with a minute-long video named ‘Paul Pogba is Cookin’!’, where he opens a recipe book named ‘Cooking with Stella’ in the kitchen.

Via a tablet, the popular designer asks him if he needs help and tells him it’s “all in the details” before Pogba whips up and reveals the boots with an “et voila!” in his native tongue.

Probed by McCartney, he confirms that the boots are vegan with an “of course”, and names them the “Vegan Predator”.

“I am a footballer first and foremost, but I have a huge interest in fashion and design and I’ve always wanted to explore this further,” Pogba also explained.

“This collaboration has been particularly special for me because I’ve been a fan of Stella McCartney’s work for a long time, so when we came together and had this idea, it felt like the perfect opportunity to create something.

“It was in the middle of lockdown and I was missing playing football so much, so it was an incredible feeling to be able to focus on something that combines my love for the game with my passion for style.

“The boots we created with adidas are bold and unique and I can’t wait to wear them when I step onto the pitch.”

“Last year during lockdown, Adidas brought Paul and I together, which is where this idea was first born,” added McCartney.

“Hearing how passionate he was about fashion and learning how much we had in common really sparked the inspiration for co-creating this iconic boot.

“One comment that stuck with me was how fashion was part of his personality both on and off the pitch, so it was important for this to shine through in the design.”

The design has also not gone down well with many online. who have mocked the star, known for his whacky haircuts and dress sense, as well as the concept.

“Who’s asking for this?,” one scoffed, while another asked: “Who’s out there eating shoes?,”

“I’m sorry but I’m not interested in eating my boots,” stated another unimpressed party.

“What the hell is going on now? This century gets stranger every year,” a fellow confused fan rued.

“Never understand the point in using the term Vegan outside of food,” started a more elaborate criticism.

“Never called them carnivore football boots before. If anything, call them ‘Ethical Football Boots’.”

Some appeared to accuse Pogba of hypocrisy by bringing up a 2018 trip to a Turkish steakhouse in Dubai with Lionel Messi.

But there were more supportive onlookers on the other side of the argument. “I see people can’t handle the fact that leather comes from dead cows and that may be a bad thing,” said one. “For the cow especially.”

Another sarcastically said: “Not wanting to wear dead animals is strange, apparently.”

Pogba and United are aiming to end a run of three Premier League matches without victory, including two defeats, when they host familiar rivals Liverpool on Sunday.

Under-pressure boss Ole Gunnar Solskjaer oversaw a dramatic comeback victory against Atalanta on Wednesday, with Cristiano Ronaldo scoring the 81st-minute winner to give his side a nervy second successive win in the Champions League.