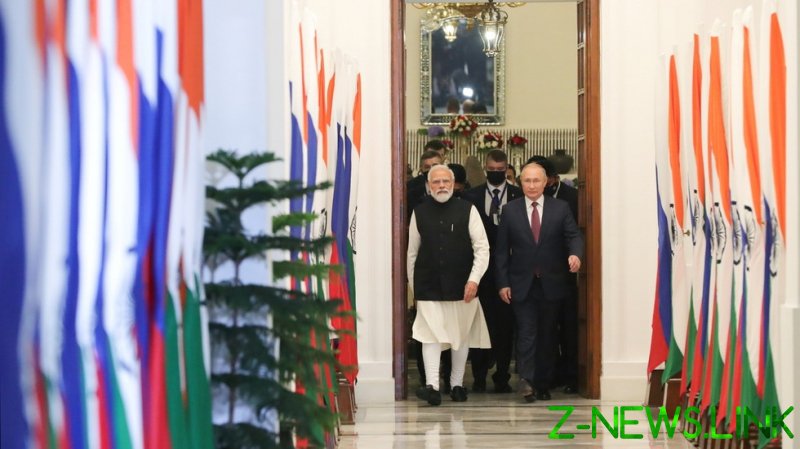 The joint Russian-Indian statement, released on the Kremlin website after the Monday talks, contains 99 points highlighting the ongoing and planned cooperation between the two countries.

Putin and Modi apparently discussed a vast number of issues during the Monday talks, ranging from military and economic cooperation to strengthening their partnership in the international field.

Some 28 new agreements – business deals and state-to-state program documents – were signed during the talks.

The two leaders “appreciated the resumption of the positive trajectory of bilateral trade, with trade registering an increase of about 38% in the first half of 2021 compared to the same period in 2020 despite the pandemic-related restrictions,” the joint statement reads.

Trade in pharmaceutical products remains “one of the main items of India’s exports to Russia,” with the two countries seeking to bolster their cooperation in the field even further.

The Covid-19 crisis has, in fact, provided more opportunities for the nations to cooperate, with the two leaders expressing “gratitude to each other’s countries for timely assistance during the pandemic.”

India’s Serum Institute, which is the world’s largest vaccine maker, has been making a localized version of Russia’s pioneering Sputnik V vaccine, aiming to produce 300 million doses a year.

Military cooperation remains among the centerpieces of Russia-India ties. During the talks, Putin and Modi finalized the deal to produce some 600,000 AK-203 assault rifles in India, as well as discussed the continued supply of S-400 anti-aircraft systems.

“Military and military-technical cooperation has traditionally been the pillar of special and privileged strategic partnership between India and Russia,” the statement reads, noting that it is currently “reorienting presently to joint research and development, co-development and joint production of advanced defense technology and systems.”

Producing sophisticated military and civilian hardware has been one of the cornerstones of Modis’ policies for years, and Moscow has been a major contributor in that endeavor.

“The Indian side encouraged participation of Russian companies in the 13 key sectors … under the ‘Atmanirbhar’ and ‘Make in India’ program,” the statement reads.

Nuclear energy, oil and joint development of trade routes were some of the other key areas Putin and Modi have agreed to reinforce. The two leaders have noted “significant progress achieved in the construction of the remaining nuclear power plant units at Kudankulam,” carried out by Russian specialists, and pledged to cooperate further in the conventional energy field.

“The sides reaffirmed their commitment for increasing sourcing of Russian crude oil on long term contracts through preferential pricing, strengthening LNG imports to India, and the possible utilization of the Northern Sea Route for energy supplies,” the statement reads.