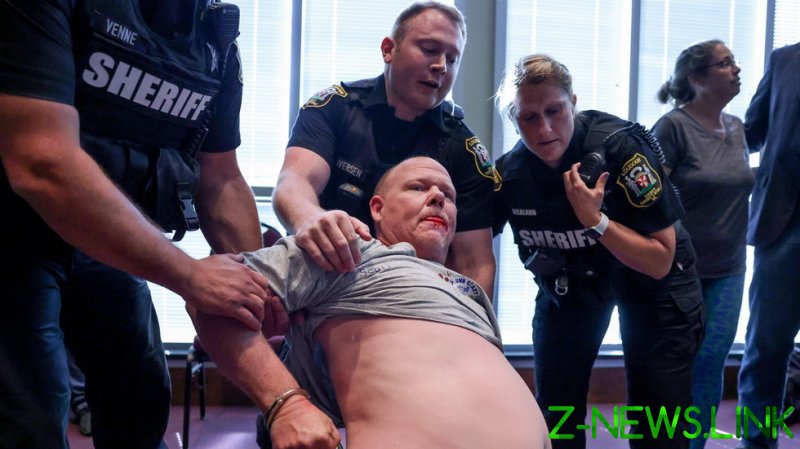 The victim’s family has demanded an apology from the National School Board Association (NSBA), which appeared to smear them and other concerned parents as “domestic terrorists” in a controversial letter requesting an FBI involvement after threats to school board members allegedly surfaced. This was in the wake of the controversial school board meeting which saw the assault victim’s father, Scott Smith, dragged out after being told by teachers they had not heard of any assaults on students in school restrooms. The meeting took place less than a month after his daughter had reported her assault to the school, and Smith has threatened to sue the NSBA for defamation unless they apologize to him specifically.

Following Monday’s verdict, the Smith family released a statement through their attorney thanking those in the community who had stood by them and vowed to move “forward to ensure that those responsible in the Loudoun County School system are held accountable, so that this may never happen again to anyone else’s child.”

The superintendent of Loudoun County schools, Scott Ziegler, apologized for claiming there had been no reports of student assault in the school bathrooms, but insisted school officials hadn’t lied – he simply hadn’t known what he was being asked. Board member Beth Barts resigned amid the controversy and parents have continued to demand Ziegler’s resignation.

Meanwhile, the ‘boy in a skirt’ faces charges of assaulting another student at Broad Run High School, where he was quietly transferred following the initial assault report. Students at Broad Run staged a walkout on Tuesday to protest the school board’s “enabling” behavior. They were joined by students at nearby Briar Woods High School.

Social media users applauded the students for “taking Loudoun County schools to task,” as many blamed the school district for what they described as a coverup.

Many celebrated the initial verdict, though some noted that the second victim had not yet received justice.

Others, however, attempted to reframe the incident as one of “dating violence,” pointing to the revelation that the victim and perpetrator had had consensual relations previously.

While the NSBA has partially apologized for the letter it sent to the White House – widely perceived as a call for the FBI to treat unruly parents at school board meetings like domestic terrorists – and blamed renegade leadership while expressing remorse at “some of the language included,” the letter’s writer, NSBA president Viola Garcia, appeared to be rewarded for going off the deep end with an appointment to a federal education governing board.

The NSBA arguably had no choice but to apologize, given that 20 state school board associations came out against their “domestic terrorist” letter, with some reportedly yanking their funding.

US Attorney General Merrick Garland has publicly claimed that “the Justice Department supports and defends the First Amendment right of parents to complain as vociferously as they wish about the education of their children,” suggesting the issue was about threats being reportedly made to the school board members. However, a group of House Republicans is now demanding that Garland “fully and unequivocally withdraw” the controversial October 4 memorandum to the FBI, which was based on the “domestic terrorism” letter penned by the NSBA.