In Belarus decided to replace the Russian suppliers of oil to Azerbaijan and Norway. But in just six months, the project has resulted in millions of losses, the details found out the correspondent Sputnik Danara Kurmanova.

In the beginning of 2020 Belarus began to look for substitute suppliers of oil from Russia. However, the experiment failed, as an alternative to Russian oil is not found for five months. This is evidenced by the import reports of the National statistical Committee (Belstat).

Despite the conclusion of contracts on delivery of oil from other countries, from January to may this year Belarus bought about 4.1 million tons of raw materials from Russia 689,8 million dollars. The total expenditure on imports amounted to 904,8 million dollars.

Why the petrochemical industry of Belarus was not able to replace the Russian suppliers? The answer to this question was looking for Sputnik.

The essence of the oil dispute

That Belarus and Russia are unable to agree on a price of oil in 2020, it became known in January. Belarus has refused to pay Russian companies prize of $ 10 for each delivered ton of oil.

The prize is called the benefit of the oil companies that remains after the sale of raw materials. In the oil industry profit is generated by premium size 6-10 dollars per ton of oil. The other components of the cost of “black gold” is its cost of production and transportation.

It turns out, the budget of the oil company is only the premium, or, as it is called otherwise, the award. Therefore, Russia considered the payout necessary. Moreover, between Russia and Belarus is no export duty. So the oil for Belarus is sold significantly cheaper than on the world market. 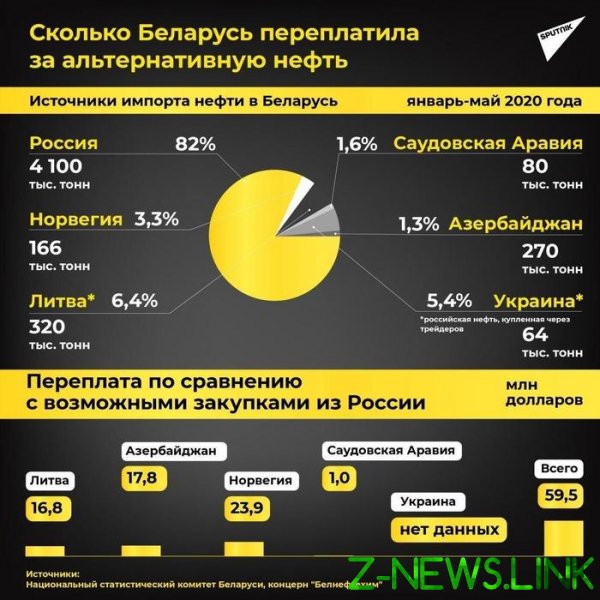 The Russian side’s proposal to reduce the size of the award to $ 6 also did not succeed. In this regard, the supply of hydrocarbons from Russia to Belarus decreased significantly in January to an agreement with the Republic came only group companies “Safmar” Mikhail Gutseriev.

On the background of reducing the volume of Russian oil supplied to Belarus, President Alexander Lukashenko instructed the “Belneftekhim” to find alternative sources of oil. And, it would seem that it was done in order to diversify supplies of Belarus has agreed to purchase oil from Azerbaijan, Saudi Arabia and Norway. However, the project has brought losses, the head of Belarus said himself during his speech to Parliament on 4 August. According to the President, because of “oil showdown with Russia,” the budget fell short of 1.5 billion rubles.

The illusion of alternatives

Why attempt to replace Russian oil didn’t work? To understand the situation, Sputnik conducted a study based on the records of the Ministry of statistics and open data of the concern “Belneftekhim”.

The fact that in recent years, Belarus received from Russia of 24 million tons of “black gold” per year. To meet such needs through other countries have been very problematic. From January to may 2020, Belarus imported 5 million tons of oil from abroad – and only 5.4% of this number were purchased in Azerbaijan. Another 3.3% of the volume could provide Norway. Saudi Arabia is less than 1.6 percent.

One of the main problems in the course of supply has become expensive logistics. For example, to get only 80 thousand tonnes of Norwegian oil, Belarus had to carry her through Lithuania, port of Klaipeda. For transporting and handling the thin oil stream Republic also paid $ 20 per ton, which exceeds the value of the Russian award twice.

Through Klaipeda and sent a batch of oil from Saudi Arabia. And to deliver raw materials from Azerbaijan, they had to use another sea route to the Turkish port of Ceyhan and Odessa as a transit point. All this again incurs additional costs. Therefore, the lion’s share of deliveries was for Russia – about 4.1 million tons of oil, or 82% over five months.

All roads lead to Moscow

The national statistics Committee data shows one interesting detail. Among the alternative suppliers of oil in the report of the Committee included Lithuania and Ukraine. However, as previously reported Belneftekhim, the oil purchased in Lithuania was the Russian. Just purchased via traders at the price without a premium and sent to Belarus from Klaipeda.

The same situation is with the procurement from Ukraine, said the expert of the Financial University under the government of the Russian Federation, a leading analyst of the national energy security Fund Igor Yushkov. “Belarus bought Russian oil and delivered through the Ukraine and Lithuania, – he explained. – And in the statistics it appears as a stranger.”

In the end, the search for alternative sources turned to the Belarusian budget with unnecessary expenses. Although from the beginning of 2020, the national statistics Committee does not publish the volume of imported oil, they are available from the open data “Belneftekhim”. The expert noted that Russian oil would cost Belarus cheaper – even including the premium.

“Even if you look at average prices for the CIS and far abroad countries, listed in the national statistics Committee, it is obvious: the average price per ton of oil in the neighboring countries is 169 dollars, and it almost completely determines Russia, – says Igor Yushkov. – While the average price for Norway and Saudi Arabia – 236 dollars.”

Analyzing the difference in prices for each state, the expert gave the following figures: the average price of Russian oil from January through may 2020 not to exceed 172,5 dollars per ton. At the same time, the average price of Azeri oil reached 238,5 dollars per ton, and Lithuanian delivery cost Belarus $ 225 per ton on average. The highest prices were in Norway – about $ 316 per ton.

The situation is not saved even a contract with Saudi Arabia, whose raw material is considered to be one of the cheapest: 121.3 dollars per ton on average. According to Igor Yushkov, in March 2020, after the refusal of an extension of the transaction OPEC+ for the second quarter of Saudi Arabia has provided all the discounts from market prices for April.

“It turns out, Belarus has bought a tanker of oil, taking advantage of this discount. So, the price per barrel amounted to slightly higher than the 16.2 per barrel. But Russian oil comes out still cheaper, since April, the Russian oil costs about $ 8 per barrel”, – concluded the expert.

Comparison of average oil prices allows to find out how much Belarus overpaid for alternative raw materials. Republic acquired 270 thousand tons of oil from Azerbaijan for 64,4 million dollars. But the same amount of oil could be purchased from Russia for of 46.6 million dollars.

Identical situation with Lithuania, where Belarus bought Russian oil from the overpayment of 16.8 million dollars. The highest rate of overpayments in Norway – 166 thousand tons of oil has cost Belarus at 52.5 million dollars, when Russia could sell the same amount of raw materials by nearly 24 million dollars cheaper. The result: 59,5 millions of dollars in overpayments on average, and this is excluding the procurement from Ukraine (the data on them could not be found).