Home / WORLD / Little Amal: why a Syrian refugee puppet is an abomination and an insult

Little Amal: why a Syrian refugee puppet is an abomination and an insult 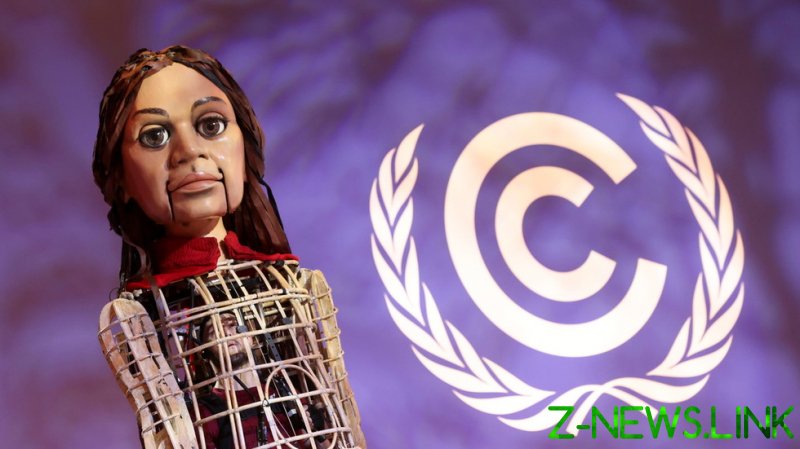 A bug-eyed and waxy-skinned effigy of a 10-year-old Syrian girl, Little Amal was designed and built by British activists and South African puppeteers, and set out this summer on an 8,000km (5,000-mile) ‘walk’ from the Syria-Turkey border all the way to the UK. Her journey was intended to symbolize that of child refugees and serve as a “celebration of migration and cultural diversity.”

She’s since added climate change and gender issues to her portfolio, reaching her final form on Tuesday, when she rolled on stage at the 26th UN Climate Change Conference in Glasgow to open its ‘Gender Day’, which exists for reasons unknown outside the NGO-media-bureaucrat bubble.

Her coming was treated with reverence by the suits and bureaucrats in attendance, and even by the media, with even the nominally neutral Reuters describing her arrival as delivering “seeds of hope to COP26.”

Anyone not paid or obliged to applaud this grotesque spectacle may have stopped to ask a few questions. For instance, aren’t the Western leaders gushing over Little Amal at COP26 the very same leaders who supported or actively aided the failed removal of Syrian President Bashar Assad from power, giving rise to the European refugee crisis in the first place?

Additionally, what does gender have to do with the climate? Wasn’t the European refugee crisis mostly an influx of African and Middle Eastern men? And how exactly does a walking celebration of illegal immigration help change the weather?

But the point isn’t to think. It’s to be blasted with guilt and to surrender to whatever liberal policies Little Amal’s puppeteers are pushing, literally and figuratively speaking. Amal bats her eyelids in Greece? Better forget about borders and laws and open the floodgates. Amal shakes hands with the Pope in Rome? That means you too, Catholics! Amal marches with climate-striking schoolchildren in Glasgow? Time to swap the cheeseburgers for bugs and soy, Western man!

Open borders, gender equity, and punitive environmental taxes and regulations are the signature goals of Western governments, NGOs, and multinational organizations, and Little Amal is an avatar for all of them.

Little Amal has been well received in the UK, with local politicians and dignitaries coming out to gaze into her plastic eyes and listen to her platitudes. “Migrant Justice = Climate Justice,” she’d say, and they’d clap like seals. Even the Archbishop of Westminster, a man one would assume to be above worshiping false gods and idols, found himself transfixed.

“Half of me says, ‘Come on, this is a puppet.’ And half of me found myself speaking to her,” he recounted last month. “It wasn’t just a puppet – though it was – but it kind of embodies a whole dimension of our human family … there was a strong emotional presence and a pull that, somehow, in her gestures particularly, was expressed.”

Little Amal’s trek was funded by British and EU taxpayers, the New York Times, religious organizations, universities, and a panoply of pro-migration NGOs and trusts, including Amnesty International and the Rothschild Foundation.

But her journey hasn’t always been smooth. She was pelted with stones in the Greek city of Larissa, where a new refugee camp was opened in 2019. The Greeks, who have been on the front lines of the refugee influx since 2015, were understandably not as enthused as her globalist backers about a “celebration of migration and cultural diversity.”

It must be noted that the policies Little Amal pushes aren’t universally hated. A majority of European voters, for instance, want their governments to tackle global warming, and, although the EU’s migration policy has been toughened since 2015, there is some goodwill toward immigrants among European citizens.

Yet immigration policy will shape Europe’s culture and demographics for generations to come, and climate policy will impact every aspect of our lives heading into the future. Regardless of where one stands on the issues Little Amal pushes, what should be despised and ridiculed is a leadership class that thinks it can use a ghoulish effigy of a child to guilt-trip adults into accepting serious and life-altering political decisions.

These leaders pretend to be serious people one moment, and sell you their world view with puppet theater the next. Whether the stone-throwing Greeks grasped this insult, or whether Little Amal just repulsed them on an instinctual level, they were right to throw stones at this horror.