Levi’s and Google has released a “smart” denim jacket 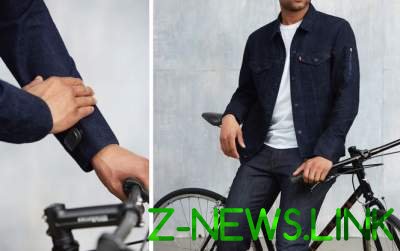 A small device on the sleeve enables you to control the smartphone.

Smart denim jacket from Levi’s and Google will go on sale in three stores USA on Wednesday, September 27.

Jacket was designed a classic model, Levi’s Commuter. It is equipped with touch panels, and a small device on the sleeve enables you to control the smartphone.

In the sleeve of a jacket inserted a small touch portion made of smart fabric Jacquard. This fabric, first introduced to Google in 2015 is made of conductive threads that are sewn into a denim-based. Touch portion transmits a signal from the user to a small chip that is attached to the sleeve with a button and sends a signal to the smartphone.

According to developers, the fabric of the jacket does not require special care, not afraid of mechanical influences and moisture.

Thanks to this tissue, the user can control certain smartphone functions using the touch sleeves. For example, using jackets, you can control navigation, music player or answer calls, just the jacket supports four types of gestures

Interestingly, the coat will be running iOS and Android, however, Google said that “properties of the jacket will vary” depending on your operating system. What exactly will be the difference, the developers said.

The network has already appeared the first tests of “smart jackets”. The journalist Dieter Bon noted that the jacket may be useful to cyclists and motorcyclists, and noticed that the jacket is good in itself, without a “smart” component.