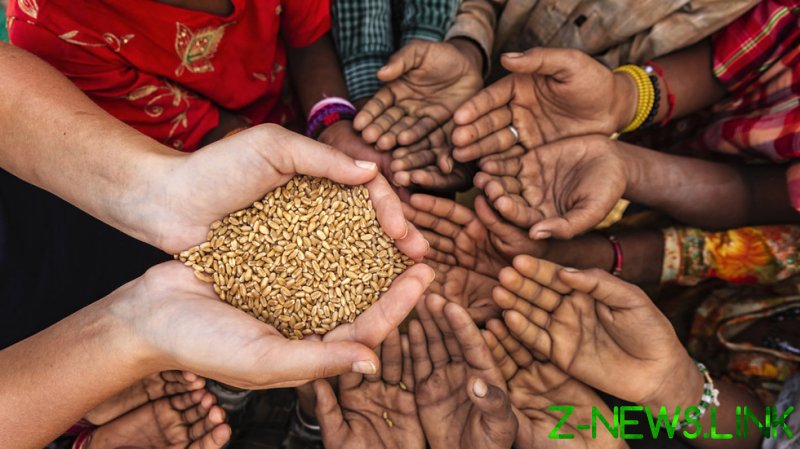 G7 leaders have called for an extraordinary session of the Council of the Food and Agriculture Organization in a bid to prevent the Ukrainian conflict from turning into a global food crisis, while French President Emmanuel Macron presented his own “initiative for food security.”

According to a communique adopted on Thursday at the summit of the world’s biggest economies, the Russian offensive on its neighboring country “places global food security under increased pressure.” Therefore, the G7 leaders agreed to use “all instruments and funding mechanisms” and involve the “relevant international institutions” to address food security, including support for the “continued Ukrainian production efforts.”

“We call for an extraordinary session of the Council of the Food and Agriculture Organization (FAO) to address the consequences on world food security and agriculture arising from the Russian aggression against Ukraine,” reads the communique.

The countries agreed to avoid export bans and other “trade-restrictive measures” and to maintain open and transparent markets, in accordance with World Trade Organization rules.

French President Emmanuel Macron has used the summit in Brussels to present his own “initiative for food security.” The world is facing an “unprecedented” food crisis, Macron said, adding that it is “a direct consequence of Russia’s choices and the war.” In the president’s opinion, the situation is already difficult and might further deteriorate “in 12-18 months.”

Speaking at the press briefing, the French leader, who is regularly speaking to Russian President Vladimir Putin, urged Moscow to be “responsible” and to allow Ukraine to continue sowing.

Otherwise, he emphasized, the “famine” would be “certainly inevitable” in many countries, which are highly dependent on agricultural supplies from Russia and Ukraine.

Among the countries most at risk, Macron mentioned Egypt, as well as some other countries in Africa and the Middle East.

Macron’s “initiative for food security” involves an emergency plan for the release of stocks in the event of a crisis, a multilateral commitment not to impose restrictions on the export of agricultural raw materials, a temporary increase in production thresholds, supporting sustainable food production in the most vulnerable countries, and creating a mechanism which would enable providing them with agricultural products “in sufficient quantity and at reasonable prices,” if such necessity arises.

Food security was discussed on Thursday by other leaders as well, including US President Joe Biden.

Macron has been warning about the global food crisis for some time and recently announced some domestic measures poised to mitigate the consequences of military action in Ukraine.

Stressing that Ukraine and Russia “are true barns for the international food supply,” Macron, who is facing the election on April 10, said that he planned to introduce food vouchers to help “the most modest households and the middle classes to face these additional costs.” However, the details of a food support program are yet to be revealed.

Russia and Ukraine are among the world’s biggest crop suppliers. According to the United Nations Conference on Trade and Development (UNCTAD), the two countries represent 53% of global trade in sunflower oil and seeds and 27% in wheat.

UNCTAD earlier said that all countries would inevitably be impacted by the conflict-generated crisis. Increases in food and fuel prices “will affect the most vulnerable in developing countries, putting pressure on the poorest households which spend the highest share of their income on food, resulting in hardship and hunger,” the organization warned.