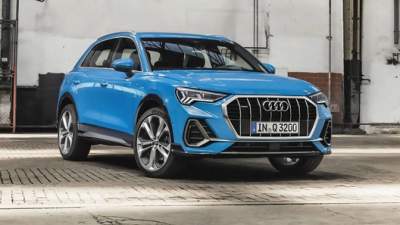 Audi, as promised, has completely declassified the new generation of its compact crossover Q3. He got rather aggressive appearance, set a new four-cylinder engines and plenty of high-tech innovation in the interior.

The manufacturer claims that the crossover kept the family status, but it was noticeably more athletic, and it is expressed both in the interior and exterior, and behavior on the road. The Audi Q3 now looks a full member of the terrain family’s German brand — for example, the style of the faceted sides with a punch and developed the wheel arches are very reminiscent of the solutions used on the Q7. In addition, the crossover supplied massive grille with vertical elements and in the version S-line — and even the impressive air intakes in the bumper. Wheels may have a dimension of from R17 to R20.

Fully changed and the optics, and the developers emphasize that the headlights and taillights look almost identical. Audi promises to offer for the crossover three options of head optics, including advanced matrix lights. Special emphasis is placed on the possibilities of individualisation of the exterior: in addition to the eleven exterior colors Q3 were also three additional optional package design.

The interior is also called “sports-oriented”, referring, apparently, clear to deploy the Central console towards the driver, and that in the design of the front panel used the same forms, and stylistic decisions of the body. In addition to the standard finishes Audi will also offer design package, and traditional execution of S-line, which will include sports seats and trim Alcantara.

With the move to the MQB family sports crossover became more noticeable. At length he rose to 97 mm, width of 25 mm and a height of only 5 mm, while the wheelbase has increased by 77 mm (2 680 mm). It is alleged that it was spacious without exception the passengers. Folding the rear seat can be moved in the longitudinal direction in the range of 150 mm, which allows you to vary the boot volume from 530 to 675 L. the Maximum loading volume is 1 L. 525

Crossover got three petrol engine and one diesel engine capacity from 150 to 230 HP, and 150 HP will provide both diesel and base petrol engine volume of 1.5 L. other engines — two-liter. Basic version will have the actuator on the front axle, but with two-liter engines by default will be installed all-wheel drive system. The role of transmission will assume a six-speed mechanics and semidiapazonny robot S-tronic. The Audi Drive Select system now includes six pregastric, and as for the suspension, it traditionally has three versions: in addition to the standard, are also offered sports and the option of adaptive dampers.

See also:  Photospin managed to film the beauty of the Chevrolet Corvette ZR1

In standard crossover includes digital instrument panel and multimedia system with touch screen diagonal of 8.8 inches. Optional “tidy” can be expanded to a full Audi Virtual Cockpit, and the “multimedia” — to advanced complex with 10.1-inch monitor, voice assistant, a set of Internet services of Audi Connect and the ability to combine on-Board electronics and smartphone into a single unit with myAudi.

In addition, the novelty has received and a wide range of driving assistants including adaptive cruise control with hold function in the strip, Parking aid, system of the circular review, system of preventive inhibition (she is able to distinguish between pedestrians and cyclists), and the like.

Releasing the new generation Audi Q3 will be at the plant in Hungary, and in European countries, the novelty will appear in November. At the start of sales will be available for a special performance crossover, which is the default supply package S-line, 20-inch wheels, matrix optics, sports seats, atmospheric lighting, as well as some distinctive features of the body.