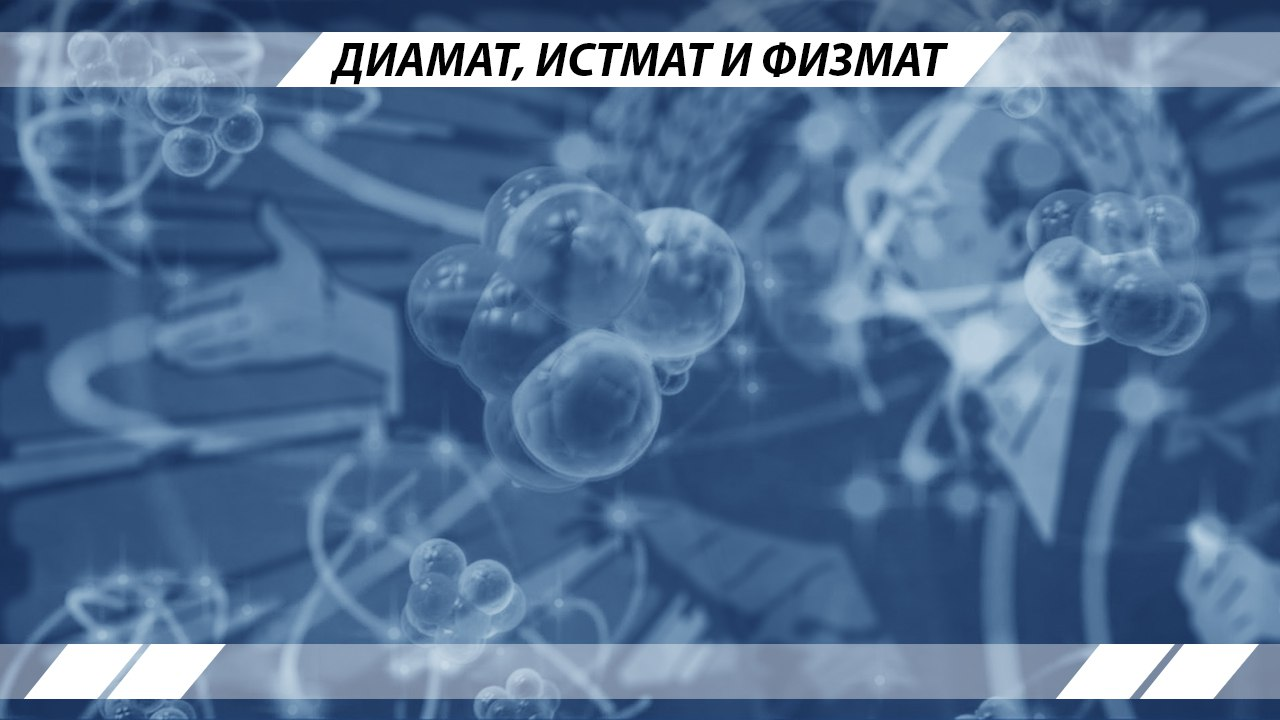 Hello, dear comrades! Before you 5 th edition of the series “dialectical materialism, historical materialism and physics and mathematics”. Today, perhaps, will be dominated by the third component. And perhaps I should apologize to lyricists that physics may be a bit too much, and before the physicists that stated she will be sadly misinterpret this principle freely. And yet… In the modern so-called “popular” publications of theoretical physics percolates, as a rule, extremely vulgar interpretation of its provisions, not approaching the reader or viewer to their understanding, and gives him only an illusion of involvement in science. 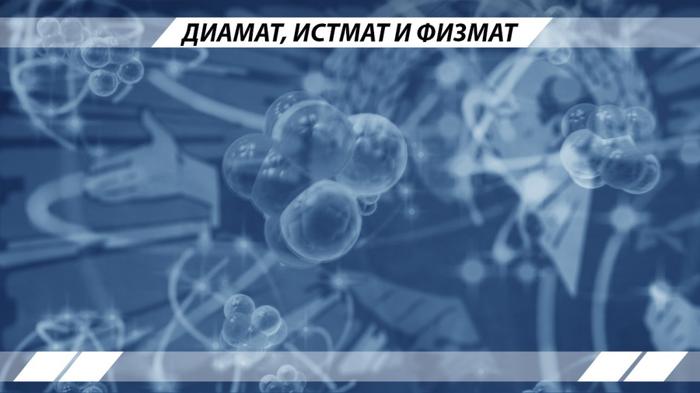 Meanwhile, we should learn how to properly treat sensational statements like that British scientists have discovered in the Universe and is already exploring 21st dimension (we here and 4 measurements really can not imagine!). Noble the requirement of integrity of science in bourgeois society is not feasible. Like everything else under capitalism, science is bought and sold. Science with culture, art and other elements of the ideological superstructure, including reactionary, as religion and the occult, is actively used by the ruling class to “lip service” of the brain. And not to be confused with a show of pseudo-science, we need to accessible to a wide range of workers level to understand the science, having not only applied, but also an important ideological meaning. So welcome to theoretical physics!

When the result of the action of force on body it is in motion, some potential energy “source of power” is converted into kinetic energy, the latter can be partially or completely dissipated (i.e. converted into heat).

The amount of converted energy “source of power” is called the work force. It is obvious that the work has a dimension of energy, i.e. can be measured in the same units as energy, e.g. joules. A in the simplest case, a constant force F acting on the straight path l in the same direction, in which the body moves, equal to the product of force and path:

(here and below, the first number in the numbering of the formulas will mean the release number of our conversations where this formula appeared).

In the case of a variable force, the work is equal to the integral of the force along the way:

2. The first idea of the Lagrange formalism (generalized coordinates)

The first great idea of the Lagrange formalism (that is, ascending up to J. L. Lagrange formal-analytical method for solution of physical tasks) is a generalization of equation (5.1).

The meaning of the generalization is: a similar equation can be formed if, instead of the path l select some other value – “generalized coordinate” q, characterizes the “spatial extent” (e.g., area, volume or angle of rotation, and, for example, mass, electric charge and even entropy flow “from one level to another”), and instead of force F – “generalized force” Q, a quantity with the nature of tension, such that the product of the generalized force increment and the corresponding generalized coordinates expressed work:

And if, in addition, a generalized force constant, then the formulas are quite simple, the work is expressed by a simple product of force and the coordinates is the integral of force with respect to the coordinate:

The last four examples the generalized force can be interpreted as the “potential difference” (the pressure difference, potential field of gravity, electric field potentials or temperatures) and the work is made as a result of overflow from the top of the building at the bottom of something, characterized by the corresponding generalized coordinate (the volume, mass, electric charge, entropy). By the way, in the immortal treatise Carnot “on the motive power of fire…” the caloric flowing from one reservoir to another is precisely the entropy.

Already these simple examples very valuable. In all these examples, as in the case of conventional forces, through the action of generalized force and generalized coordinate converts the potential energy of the “source of strength” in other forms.

This does not happen, if despite the existence of a generalized force (or potential difference not equal to zero) generalized coordinates does not change (i.e., the increment is zero) due to the presence of a potential barrier. 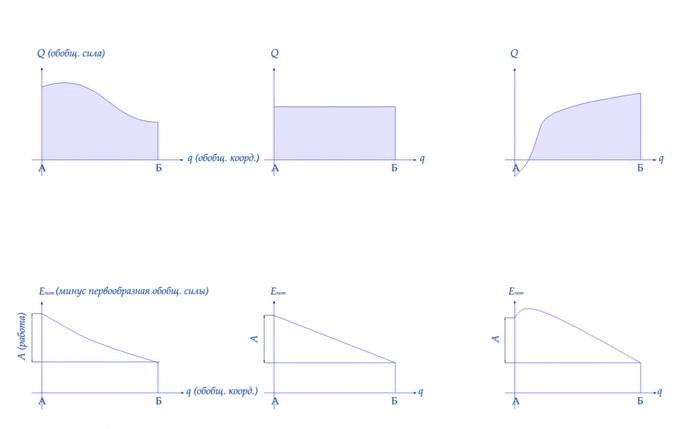 To illustrate geometrically. The magnitude of the work is numerically equal to the area under the graph Q(q). In the case of a constant force is simply the area of a rectangle.

However, as mentioned, the energy conversion is not. But we can instead barrier put, so to speak, “channel pairing” (that is, to arrange so that the increment of generalized coordinate went on some “channel” and convert the potential energy of the source was connected with useless scattering, and making useful work). We can get a lot of water when falling from height, that is, in overcoming the potential difference of the force of gravity to turn the turbines of the power plant or may cause the entropy flowing from the combustion chamber into the environment, turning the car engine. Yes, and the very nature of life makes the potential energy contained in proteins, fats and carbohydrates, before they are oxidized to carbon dioxide and water to perform various useful for the body work.

And we can carry out the process in the opposite direction (against the generalized force), (thereby pumped system potential energy) at a cost (net of losses) as much energy as is released when the process flow in the forward direction. For example, we can transport electric charge vs electric potential difference, charging the battery or to pump entropy from a cold body to a warm, thereby increasing the temperature difference between the refrigerating chamber and the environment.

3. Exit to another dimension

Let me remind you that while we were considered “one-dimensional” cases. In “one-dimensional” case, i.e., if the physical system is only 1 degree of freedom, the shape of the path between 2 points is fixed, the differential of a function of one variable, so to speak, is always full, then elementary work

– total differential, so the one-dimensional case, the total work on the path from point a to point B can always be calculated by the formula (5.1 b)

Now remember that we live in a three-dimensional physical space. In this one material point has three degrees of freedom, i.e., its position is described by three coordinates and of ordinary mechanical force acting on her is a vector value having three components. The work force in three-dimensional space just as it was in the one-dimensional case can be calculated by the values of the integral from the power at 2 points A and B, and then only when the work is on the way from point A to point B is completely defined by 2 points – the end points of the path and does not depend on the shape of the path.

See also:  Researchers from Sweden have created a liquid that can store solar energy 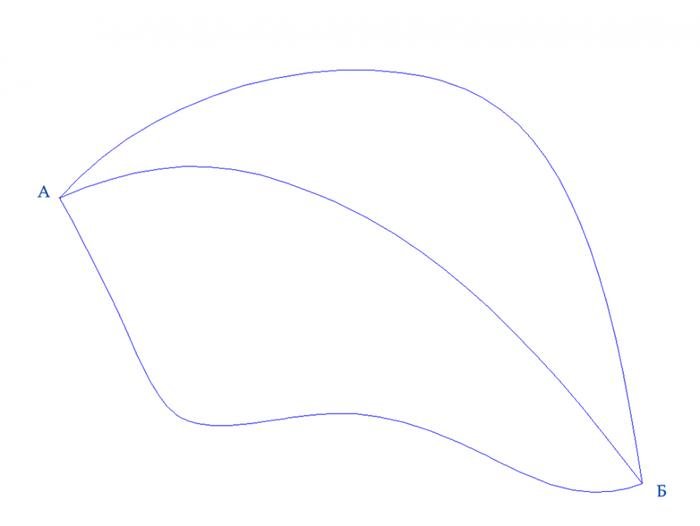 It happens in the case when the elementary work

is a complete differential of some function, in other words, when the force is the gradient of some scalar function (the power function, or a minus potential energy U = -Epot:

In this case, all components of the force vector F (in three-dimensional space 3) at each point are determined by only 1 scalar function, the potential energy Epot. Such a force is called a potential, these are, for example, gravity, elastic force… When such kunshtyukov information vector to a scalar is possible, the calculation work is reduced to the calculation of the potential difference. About when such kunshtyukov possible, we’ll talk in a conversation devoted to the mathematical theory of fields. There we take a closer look at and mentioned the concept of “total differential” and “gradient”. Now we verify that the method of generalized coordinates and generalized forces is very useful not only in such special cases. First, find a universal expression for the generalized force.

4. The expression of the generalized forces

If the system has no friction, the force causes a change in kinetic energy:

If these conditions (the potentiality of force and the absence of friction), the two previous equations we get is:

If in our system there are some external (active) force, equation (5.5) becomes inhomogeneous, that is, it appears not equal to zero the right part:

We may write the equation with respect to two different values Epot and Ekin, and about their difference

which is called the kinetic potential, the Lagrange function or the Lagrangian L:

The fact is that if we write the Lagrange equation as:

Usually Ekin saisit only on the velocities q i, but not of coordinates qi, and EPOC – on the contrary, depends only on the coordinates qi, but not of the velocities q i. Therefore, in the first brace, the first term vanishes, the second – second and we get equation (5.5 a). But in the case of generalized coordinates in General case any element is not required to be equal to zero, so the Lagrange equation (5.7) is more versatile than equation (5.5 a). In the following conversation we will be surprised how versatile it is. In fact, just the reasoning is not the conclusion of Lagrange’s equations, and merely supporting arguments to help you understand what’s what, and the next conversation we will approach this equation from the other side.

here Qi_внеш – already the total, potential and nonpotential generalized force acting on the system from the outside and causes the change of the parameter qi, the so-called “active” (“external”) force. This equation for us in this conversation is still useful.

Dear comrades, let’s take a short break. The text itself is interesting, the second part of the fifth edition will be published soon. A video You can watch today: 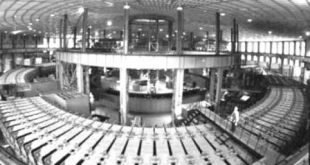