Home / policy / Kovid comes to Russia do not breathe

Kovid comes to Russia do not breathe 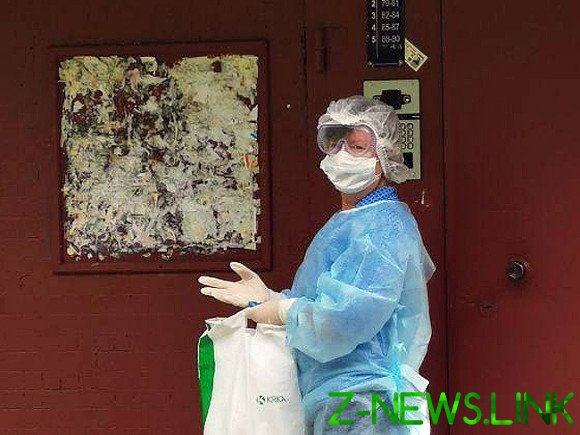 Coronavirus migrates around the country from the capital to the province. And, apparently, no power, no medicine in most regions are not ready to take the hit.

Almost all Russian municipalities began the weakening of quarantine measures, despite the ongoing pandemic of coronavirus. Officially reported that it went into decline, but in many regions, hospitals remain overcrowded and doctors work wear. Seem justified the predictions of those who say that after the beginning of the decline in trends in the capital wave COVID-19 still on time to cover the province.

17 June there were 7 843 thousand new infected, while a month ago, on may 17 there were 9 thousand 709 new cases and the highest number was a few days before, 11 — may- 11 656 thousand. Curve new diseases on the charts formally came down. However, in the regions there is another picture, and “the average temperature in the hospital” will not suffice.

In some regions now infected even more people than a month ago. Thus, in the Orel region “Curve” of diseases jumping up and down. 17 Jun 67 new confirmed infected, and the day before, June 16 — 110. The largest number of new infected was recorded June 9 — 125.

“Over the past two weeks has increased the number of patients coronavirus infection, and due to flares in treatment-and-prophylactic institutions, hospitals. Talking about just the recent scandal in Orel regional hospital: there is now patients many offices were affected by coronavirus. Infected and patients with chronic diseases. For example, people come to the hospital after a heart attack, while they are treated, they get sick and coronavirus. Also ill a lot of doctors, nurses. The situation leaves much to be desired”, — told the correspondent of “Rosbalt” the Chairman of the Oryol trade Union organizations of health workers “Action” employee service “ambulance” Dmitry Seregin.

Not only sick COVID?

Doctors have to fight not only against “official” coronavirus, but against waves of other diseases. State Duma Deputy Oleg Shein said that to understand the General climate statistics for the coronavirus must be supplemented by figures on the incidence of pneumonia.

If, for example, in the Astrakhan region with pneumonia almost two times less than the infected COVID-19, in St. Petersburg and Dagestan, data for community-acquired pneumonia greatly exceed the data COVID. And the mortality rate there is quite global,” — said the MP.

In the Vladimir region on 17 June, there were 56 recorded new infected with coronavirus, while a month ago, may 18, was 99 new infections. However, according to the head of the trade Union organization of “first aid” Vladimir, paramedic Catherine Ashaway, less work, doctors did not.

“We support staff, “ambulance”, we note that challenges with pneumonia in the last two weeks was probably even more than it was in the spring. There are even problems with the hospitalization of these patients. It happens that in Vladimir there are no empty seats in the hospital, and we have to hospitalize patients in the Vladimir region, to other cities,” — said match, and he told.

According to the Union activists, the epidemic showed a lack of capacity of regional medicine. “I do find it unacceptable that the team delivers emergency medical care of infectious patients in Vladimir region. We have to shift out only 7 to 12 cars instead of 35. And when two cars leave the area, then how much will Vladimir? To get to the Goose-Crystal, you have to spend an hour and a half. One and a half back and a half back, and three hours of assistance to patients, Vladimir falls. And it turns out that people with other disorders — cardiac, etc. — are at risk, because the team comes to him much later, spent enormous amount of time for hospitalization of infectious patients,” said Catherine match, and he.

In the regions of the pronounced effects of the “optimizations” and the cuts in the health sector. Now re-profiling of hospitals under infectious, the closure of health facilities in quarantines leaves many Russians without medical help.

In the Perm region in the first month of summer new infected with the coronavirus is registered more than in may. 17 June, it was revealed that 67 new infected. The highest number was on June 14 — 107 new infected, while a month ago, on may 17, there were 52 new patients with this diagnosis.

Epidemic COVID-19 in the Perm region has hit other sectors of medical care. And again, it turned out that health care lacks capacity. “There was a problem with the maternity hospitals. The largest maternity hospital in Perm, which is the perinatal center was closed for quarantine. In the end, increasing the load on the other hospital that are in more remote areas. A very acute problem with the equipment, personnel and beds,” he listed the representative of the trade Union “Alliance of doctors” of the Perm territory Valery Merkulov.

Add to this that the consequences of the disease for a particular patient will vary depending on the region where he lives. The level of medicine much different.

The onset of summer can lead to geographical displacement of “hot spots” COVID: Russians, including those infected will go on vacation in the southern regions. Overcrowding of tourists will contribute to the spread of the virus.

“In recent days in the Crimea poured a huge amount of tourists, I see lots of cars with mainland plates. The tourism industry, those who want to earn money, of course, applaud it. But most of the locals that do not depend on tourism, are simply afraid of the resurgence of infected, I’m afraid to get sick and die. And it’s clear that restrictions on entry are removed for the sake of the tourist season and the need to vote on the amendments to the Constitution. I am sure that a similar situation exists in the neighboring Krasnodar region”, — said the Crimean blogger Alexander Mountain.

He suggested that resort medicine may not be ready to fight against the epidemic. “When there is no tourist season, the Crimean health can cope with some diseases, but when it was tourist season and the spread of rotavirus infection, the local clinic could no longer cope with the volume of cases. You have to understand that Crimean medicine no one still haven’t done much. Republican clinical hospital is still under construction. And little to supply ventilators — still need frames. In my value judgment, regional medicine is not ready for a spike up to 50-100 cases in a day,” said Alexander Mountain.

Figuratively speaking, the virus, like a ball, rolling across the country. Somewhere he was kicked out by the doctors, but he rolled to the other regions, and not always ready to contadero.