Home / WORLD / Knifeman tries to attack people & injures policeman in Oslo, gets killed by the officer

Knifeman tries to attack people & injures policeman in Oslo, gets killed by the officer 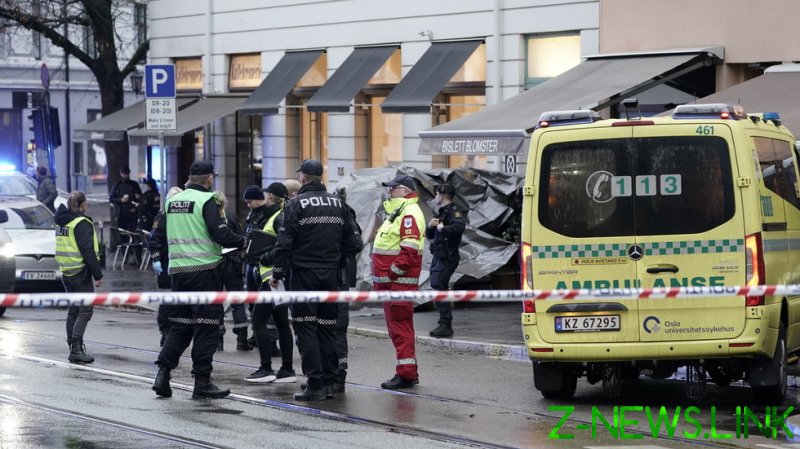 Footage and photos shared online show a law enforcement vehicle ramming a shirtless man in the Norwegian capital as he brandished a knife and reportedly threatened passersby.

After being flung backwards by the police car, the knifeman manages to get back to his feet and opens the passenger door of the police vehicle. At that point, he appears to engage in an altercation with a seated officer before a colleague emerges with a gun, shooting the assailant.

The head of operations with Norway’s police, Torgeir Brenden, stated that the man was readying himself to stab another individual when the police car hit him. “He was about to attack people on the street when the police came and had it stopped,” Brenden stated.

“Two people were involved, and the police took care of them as best they could,” the police chief said without elaborating. It is understood that an officer was injured but not seriously. Brenden said that no one else was injured but added “we can imagine that he intended to attack more.”

It is not yet known what the suspect’s motive was, although eyewitnesses claim that the man shouted “Allahu Akbar” (God is great) during the attack.

The police confirmed that the incident took place around 9am local time in the Bislett part of Oslo. The condition of the suspect has not been confirmed although some reports suggest he died at the scene.

According to Norwegian media, the knifeman was convicted in December 2020 of committing another semi-naked knife attack on June 4, 2019. The attacker, who reportedly shouted ‘Allahu akbar’ during the 2019 attack, was stunned by a police gun and arrested. He was sentenced to compulsory mental health care and a fine. The man grew up in Russia’s southern republic of Chechnya and, according to local media, suffered from post-traumatic stress disorder.

The attack comes after an incident in Cannes, France on Monday, when a man armed with a knife opened the door of a police car and attacked one of the three officers inside. The knifeman, who reportedly said something about “the prophet,” was shot by one of the other officers. One officer sustained injuries.

In October, a Muslim convert killed five people in a bow and arrow rampage in the Norwegian town of Kongsberg.