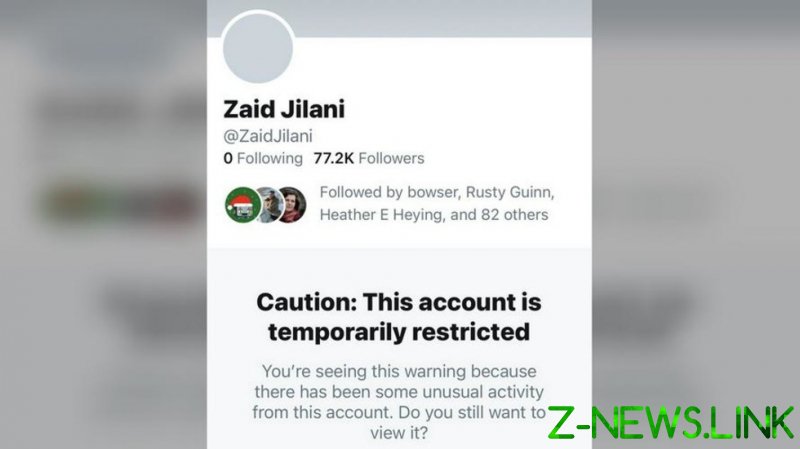 Jilani’s account was ‘temporarily restricted’ on Thursday and those wishing to see it had to click through a notice. As usual, Twitter did not give any reason or explanation for the action. The lockout was noticed by Jilani’s former Intercept colleagues Lee Fang and Glenn Greenwald.

While the most recent post on Jilani’s account is a retweet about the investigation into Hunter Biden’s business dealings with China – something Twitter had cracked down prior to the election as mainstream media and Democrats insisted, wrongly, it was “Russian disinformation” – his lockout may instead be related to an argument with Hannah-Jones.

“I looked into this further and I just think it’s not true that Glenn Loury, who grew up in the south side of Chicago in the 1960’s would be afraid to step foot in Brownsville in 2020,” Jilani said late on Wednesday, in response to a now-deleted tweet from the Times writer.

Hannah-Jones had apparently criticized Loury – who became the first African-American tenured economics professor at Harvard and currently teaches at Brown University – over his remarks about black-on-black violence in America’s cities.

Loury responded indirectly on Thursday, praising a book by Peter Wood called “1620: A Critical Response to the 1619 Project” for exposing the “ideological objectives of that particular piece of activist-journalism, and the manipulative modus operandi of its practitioners.”

“This book is a superb example of sober and balanced historical scholarship. As such, it stands in sharp contrast to the glitzy, superficial, tendentious, sophomoric propaganda which has been inflicted upon our people – and especially our children – by the New York Times,” he added.

Hannah-Jones received the Pulitzer Prize for her flagship essay headlining the ‘1619 Project’ earlier this year, named after the year the first African slaves made it to America’s shores. She later backtracked on her claim this had been America’s “true founding,” while the Times stealth-edited the series following criticism.

Even so, the project is still being promoted in many US schools, in the name of racial equity and justice.