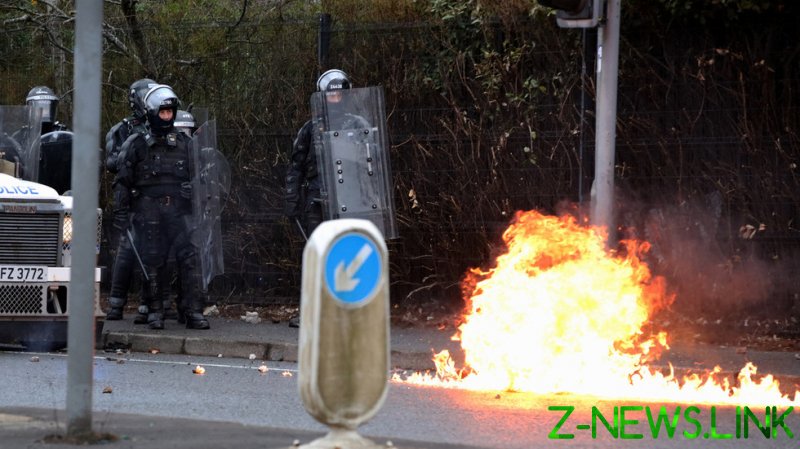 An open letter signed by four former Northern secretaries, the North’s ex-police chief and also a former archbishop, called on Prime Minister Boris Johnson to “step up” and “take an interest” in the region before unrest among loyalists, those in the province that align with Britain, spirals out of control.

“With our long collective experience we are extremely worried that violent unrest on the streets of loyalist areas and at interfaces is a consequence of politics, both in Stormont and in Whitehall, failing the people of Northern Ireland,” they wrote.

The message follows weeks of protests, some of them descending into violence, sparked by anger over border controls and other trade regulations that came into effect in January after the UK formally withdrew from the European Union.

Belfast was hit by violent riots earlier this month, with angry loyalists hurling petrol bombs at police. The violence was linked in part to the government’s decision not to prosecute anyone for violating coronavirus restrictions during a funeral for a former senior IRA member in June.

The letter cautioned that there was a strong sense within unionist/loyalist communities that no one was listening to them and that they had been misled by the British government about the consequences of Brexit.

“While the violence is unacceptable, the fact is that there are grievances, real and perceived, within the broader unionist community and that cannot be ignored by the UK government,” the group argued. If Whitehall fails to act, it would risk allowing things in Northern Ireland to “fall over,” creating a dangerous “political vacuum.”

They also called on Johnson and Northern Ireland secretary Brandon Lewis to “rebuild trust” with the government of Ireland, claiming that relations between the two neighbours were “badly damaged.”

Tensions in the country have shown no signs of letting up. Protests resumed last week after being paused following the death of Prince Philip.

On Tuesday, a suspected explosive device was found planted under the car of a police officer in Dungiven, County Derry.