Home / WORLD / I’ve gone from pro-lockdown to NO lockdown. Here’s why people must take over from inept governments and learn to live with Covid

I’ve gone from pro-lockdown to NO lockdown. Here’s why people must take over from inept governments and learn to live with Covid 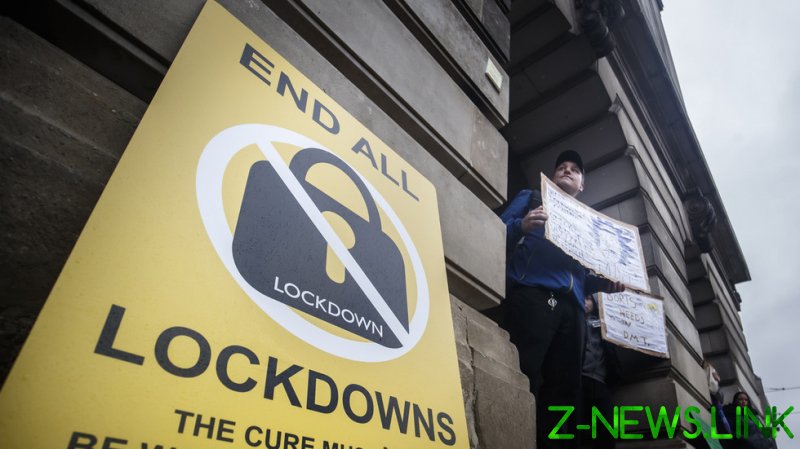 Sometimes, if you want a job done well, you have to do it yourself. Sadly, many jobs that need doing well are occupied by people whose gift for doing them isn’t just non-existent, it’s a black hole that sucks in and destroys any crumbs of talent that happen to be floating in the vicinity.

Here in the UK, the job of prime minister is taken by a man who, when the going gets tough, gets going on holiday. Other jobs, such as those of health secretary, home secretary, chancellor and education secretary are taken up by fawning lackeys with all the independent thought and qualifications of a reluctant 15-year-old intern who’s only there because their dad’s mates with the CEO.

And yet, despite this, when Covid-19 made its intentions and capabilities known, I backed this U-turning confederacy of dunces. I thought that a ‘lockdown’ was the right thing to do. I know there were arguments about the efficacy of various measures, about mortality rates and transmission. I also know that those arguments have become mind-numbingly tedious and repetitive, so let’s not go there. At the time, nearly all evidence and expert advice suggested that we should err on the side of caution. End of.

Lockdown here was a walk in the park, literally, compared with what some populations endured but it still hurt people – financially, emotionally, even physically. I lost thousands in income and sought help for my skyrocketing anxiety levels, and yet still I gave that flock of dangerous idiots leewayin what can comfortably be described as a very, very weird situation.

However, there’s a ‘but’ – one big enough to get Sir Mix-a-lot interested. There must not be a second lockdown.

After a summer of relative liberty, sharp rises in infection rates have triggered Boris Johnson and the man who operates him, Dominic ‘no-one talks to me at the office Christmas party’ Cummings, into burdening us with new draconian measures, somehow more confused and complicated than the original rules. It’s now clear that we’re weeks, maybe days, away from a return to the ‘all but essential’ mantra. No more nights out at the pub, no more nights in with friends. Back to the heavily-scraped bottom of the Netflix barrel.

No matter what middle-class journalists like me tell you from their home offices, this will be a disaster on so many fronts. It will stamp on the teeth of an economy that’s already lying in the gutter crying for its mummy. It will send half the population either mad or into the streets with flaming torches. It will crank up the dial on already bitter societal divisions to 11. It will utterly wreck Christmas.

Shutting the country down again, with no end in sight, will be like sticking a cork in one end of a balloon while filling it with a waste pipe at the other. Whether the balloon bursts or is uncorked at a later date, it’ll create a terrible mess.

You have, of course, the fact that it’ll be adding salt to particularly nasty economic wounds that are about to have the clumsy fist of Brexit shoved into them. The ruination of businesses, charities, families, support services, and the travel, hospitality, arts and entertainment industries, is a surefire bet. This is a government that simply doesn’t care if you don’t have music, film or theatre in your lives next year.

Jobs and homes will be lost, people will end up on the streets. The uncertainty and short-termism of the government’s measures (sometimes announced overnight in its signature cowardly style) make it impossible for anyone to plan or invest. Government aid is ending, so who’d keep staff, let alone hire them? Who’d book a holiday? Who’d order a turkey?

Then there’s people’s wellbeing. People are already dying of other diseases as a result of Covid-related measures. Some of this is due to a shift in resources towards dealing with the pandemic, but much is down to hospital services being limited or frozen and people being frightened to visit doctors. Workers will refuse to get tested because they fear quarantining without pay, making them more likely to spread the virus.

It’ll cause a mental health nightmare, plunging people into depression and causing unmanageable stress levels at a time when they can’t get proper help – not least students who already feel imprisoned in halls. Some will be forced to work in risky conditionsbecause a lack of financial support means they have no choice. Others will simply be fed up with arbitrary, ill-explained and increasingly short-notice limitations and therefore tempted to flick a collective V-sign at the authorities.

There are already indications that people have had their fill of lockdown measures and tightening the grip further is asking for trouble. As Mayor of Manchester Andy Burnham said, these measures could make matters worse and lead us to a “winter of discontent.” Our lives have to varying degrees been hammered like a tough steak for months and most of us have accepted it with some grace. But we all have our limits.

To misquote Newton’s third law of motion, every action has an equal and opposite reaction. The harder you try to contain people, the more dramatically they’ll rebel.

Among these people will be the usual arseholes whose raison d’etre is to make life uncomfortable for other people, no matter what the situation; the cough-in-face types, the spoilers for fights over masks. There will always be the incurably stupid, too. And then there’ll be responsible citizens, of which I’m generally one, who have had enough. If this group sees no reason or effectiveness in the rules, perhaps sees their elected and unelected leaders continue to break the rules, then they’ll be less inclined to follow those rules.

A heavy, nationwide lockdown also won’t work because this virus isn’t going away any time soon. There will almost certainly be no widespread vaccine or divine intervention that sees it disappear by Christmas 2021, let alone this winter. And you can’t shut the country down forever.

So what do you do when something can’t be got rid of? You don’t hide from it, you learn to live with it. The problem is, as mentioned, this government, like many, doesn’t have the smarts to do that.

It specialises in things that don’t work. Effective track-and-trace app? Nope, sorry, can’t do that. Functioning testing system? You’re having a laugh, mate. A vague semblance of competency? It can’t even master an Excel spreadsheet. This is the government that didn’t think a return to schools and universities would cause a September surge in infections, that flips daily between telling us to get out and stay home, like a political hokey cokey, and whose hardline measures so far have still allowed more than 42,000 deaths (and that’s just from the virus).

This is why its role needs to be limited, like you would that of the aforementioned 15-year-old intern. It should provide, not instruct. It can supply data and advice, and can give people freedom and responsibility, and it can write cheques for things like testing and healthcare and for ideas with brains. But that’s it.

Decisions need to be taken on a micro level; national government is too macro for this situation. Blanket rules won’t work now. We need to adapt and adjust by location, age, job and risk. We need to give people clarity and reliability.

We need to think local and use more intelligent data analysis. Look at hospital admissions, not just infections and deaths. Look at demographics, postcodes, favourite ice-cream flavours. We’re a data-filled, algorithm-obsessed planet, so let’s use this to be nimble and clever.

The R-rate in Birmingham should not be affecting my ability to have a pint and a pasty in Falmouth. If I’m 25 (I’m not) I should have more freedom than is currently being offered, because I’m statistically at less risk than someone who’s 85. However, I should also have more responsibility for the 85-year-olds, the asthmatics, the diabetics. Don’t punish me for being young and healthy, but encourage me to protect the vulnerable – and maybe have a punishment up your sleeve if I don’t.

Mini local lockdowns and short-term local furlough schemes with defined time limits could be used as ‘circuit-breakers’ for the spread of infection. If pubs shut for one weekend, for example, with help and clarity they can adjust and cope. As can pub-goers. These are bumps in the road, not walls to smash into.

People and businesses should be trusted to be ‘Covid-smart,’ too. Rule one of this pandemic (and of life) should read ‘Don’t be a d**k,’ and we work from that. Everyone should have the right to work from home if they can, but also the right to go to a safe place of work. Have restrictions in a cinema, sure, but not at a funeral. Give guidelines on hygiene and safety but allow us to be sensible with things like mask use, social-distancing and numbers at gatherings, particularly when it comes to friends and family. No one (well, very few people) want to give their nearest and dearest a dose of a potentially deadly bug. Not even at Christmas.

I’m just spitballing here but all of this makes more sense than harsher, ineffective rules that breed resentment, discord and disorder. It’s all about less pain, more gain – the opposite of that Newton principle. The less you press people, the less likely they are to overreact. Give them room to breathe and adjust and they’ll feel like they’re being treated as adults. But there will be idiots, so don’t spare the rod on those who flagrantly abuse that freedom to the detriment of others. Carrot dangled, stick held behind the back.

This is not about belittling the obvious dangers of the virus; too many people have died and suffered for anyone vaguely intelligent to do that (comparing it to other causes of illness isn’t logical or helpful, thanks). It’s about facing up to reality and necessity, and dealing with these two very annoying things in a way that allows people to live as normally and happily as possible, protects their jobs and businesses, and looks after their mental and physical health.

The UK government has consistently blamed its failings on the public, despite using Covid to give itself dictatorship-like powers. So we might as well be given the chance to fail – or succeed – on our own terms.