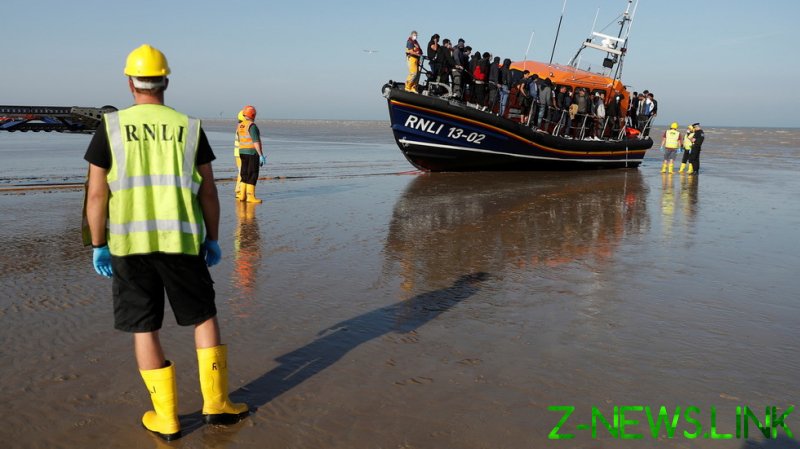 I remember being in the European Parliament when awful photographs of dead migrants being washed up on Turkish and Greek beaches began to be beamed around the world.

It was a dreadful situation, because although our hearts went out to those who had perished in the Mediterranean, we also knew that the only way to prevent more deaths was to impose policies that discouraged the migrants from making the journey in the first place.

Of course, this was undermined by Angela Merkel’s disastrous idea to invite the migrants who were crossing the Mediterranean to make their way to Germany.

Nevertheless, politicians in the UK are now facing a similar situation, because if they fail to get a grip on the migrant crossings in the English Channel, then the bodies could soon be arriving on UK beaches.

I am not suggesting for one second that the scale will be anything similar, as 12,000 migrants died in the Mediterranean in 2015 and 2016. However, a recent report claimed that 300 migrants have already perished trying to make their way into the UK over the past 20 years.

However, there has never been anything like the numbers trying to make their way across the English Channel that we’ve seen this year, and as a result, the number of drownings – which are already suspected to be massively under-recorded – could rise significantly.

It’s been revealed that twice as many migrants have travelled across the English Channel this year in comparison to 2020. While last year 8,450 arrived in the UK via this route, in 2021 that number has jumped to 17,063, and it is still only September. There is no sign of the numbers falling, either: on Sunday alone, 669 migrants made it across the Channel in 22 boats.

However, things are now going to get really serious, not just because of the numbers of people making the journey, but also due to the change in season.

As summer moves into autumn, the sea temperatures fall. Indeed, the English Channel becomes significantly colder in October, as it drops from around 17 degrees Celsius at the beginning of the month to 14 degrees by the end.  Moreover, in November, it can fall to under 12 degrees. This might not sound like much of a difference, but if you are stuck in the water for any length of time, it could be fatal.

I would argue, therefore, that the time for chatter is over, but that is unlikely to be the case next week at the Conservative Party Conference.

I am sure Priti Patel, the home secretary, will use her speech to talk a tough game, as she always does. With promises to tackle the migrant issue through harsh measures and a dash of French bashing, she will undoubtedly be the ‘darling of the conference’. But this will not be good enough, as it is now time for action, not just threats and empty promises.

And the work must start at the source. To put it bluntly, the French must do better. In July, the UK government promised to provide the French with £54 million to prevent the migrants from leaving their shores. Yet this is clearly not working.

In September alone, 160 boats with 4,638 people on board left France and successfully crossed the English Channel. If these numbers continue into October, then it is inconceivable that there will not be fatalities.

Nobody wants to see photographs of dead bodies appearing on the UK’s beaches – or anywhere, for that matter. But that is precisely what will happen if political posturing is not replaced by co-operation and action.

The French need to up their game and stop the boats from leaving their ports and beaches. The UK must also stop being viewed as a soft touch. With four-star hotels on offer, trips to football stadiums, and free healthcare, who can blame the migrants for wanting to make their way across the English Channel?

The UK government must be prepared to return those who have come here illegally, either to France or their country of origin, and it must be done swiftly.

A message needs to go out that illegal immigration will no longer tolerated. Tough love, I am afraid, is the only way to end this crisis and ensure that migrants do not drown making their way across the English Channel this autumn.