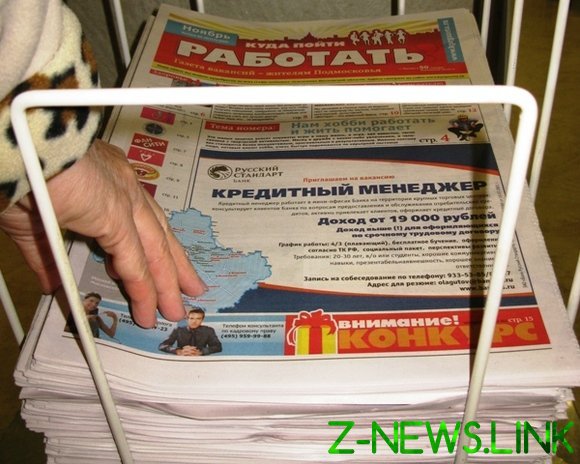 Experts rating Agency “National credit ratings” (NKR) found that the shadow employment in Russia is 13 million people, or 18% of the workforce.

This is indicated in the study, “if everyone employed receives informal average for the region wages, lost income of budgets of all levels is about 3 trillion roubles of 0.9 trillion rubles personal income tax plus 2 trillion rubles of contributions to extra-budgetary funds”.

“Additional taxes due to the informal employment in the legal sector would reduce the pit rate from 13% to 11%, almost without changing the total volume of fees personal income tax in absolute terms”, — quotes RIA “news” endurances from the study.

For their part, the experts Ranepa previously conducted its own study of the shadow labour market, which was considered informal employment as wage earners and self-employed. “The total turnover of their earnings amounted to about 10 trillion. If a rough estimate of the amount of taxes and insurance payments that would come in the budget with these revenues will be a minimum of 2 trillion rubles,” — told RBC Director of the center for socio-political monitoring, Institute of social Sciences of Ranepa Andrew Departing. In his view, the assessment of foregone income from informal employment to 3 trillion rubles looks quite plausible.

Recall also that, according to the calculations of Rosstat, the average monthly salaries of employees of organizations in Russia in September 2019 rose by 7.2% yoy and reached 45,541 thousand rubles. In the 9 months since the beginning of this year the growth rate of nominal wages was similar, 7.2 per cent. While real wages (adjusted for inflation) increased in September by 3.1% yoy, 1.3% in August and 2.3% in the first 9 months of the year.

Real disposable income (less mandatory payments, adjusted for inflation) of the population of Russia in the III quarter of 2019 has increased by 3% yoy after a decline by 0.1% in April—June (revised from minus 0.2 percent evaluation). In the first 9 months of this year, the index rose by 0.2% in annual terms.

Previously, experts of the Institute of regional problems fixed (in a study based on data for August) almost universal decline in nominal wages in Russia — they fell in 69 of the 85 regions of the country. In this case, more just wages fell in the Murmansk region by 12.2%, followed by Karachay-Cherkess Republic (9.5%), and the three “leaders” closed the Chukotka Autonomous Okrug (9.2%).

We add that, according to estimates of the employment portal “Work.ru”, almost every fifth employee in Russia this year noticed the decrease in the level of their own remuneration. 57% of respondents said that “their salary this year has not changed”, and 18% of employees of Russian companies complained about “the decline in private earnings”.

November 20, Russian President Vladimir Putin called on the government to reverse the situation with the dynamics of real incomes of the country. This is critical work, he said at the forum “Russia calling!” while recognizing that the results of this work “still quite modest”. According to Putin, it is known that wages in Russia are growing in nominal and real terms, but the disposable income of citizens, “almost stand still”. This situation must change said the head of state.