Home / economy / Isn’t it time to give the security forces the economy?

Isn’t it time to give the security forces the economy? 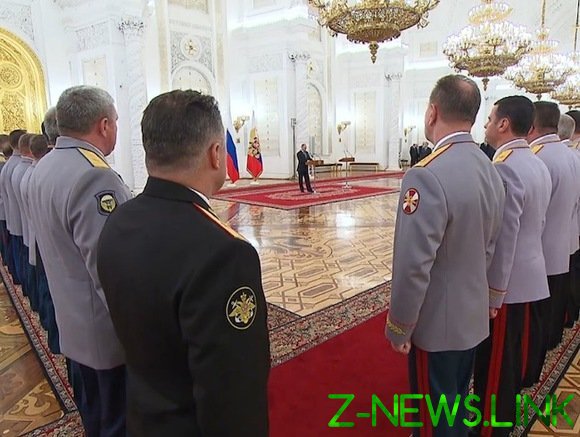 If the Colonel of the Ministry of interior had amassed nine billion, and Colonel of the FSB twelve, it is impossible to imagine to what heights would raise the welfare of the generals.

How to bring Russia’s economic growth? The government is looking for incentives, and the decision on the surface. It is necessary to rearrange the chairs. The Minister of internal Affairs to deliver on economic development. The head of the FSB to transfer to the Finance Ministers. And once the economy blows up the hill. Two opinions can not be. Already, the security forces voluntarily took upon themselves the economic functions, but sincerely, without hypocrisy trust in them with this arduous activity we lack integrity.

If the Colonel of the Ministry of interior had amassed 9 billion, and Colonel of the FSB — 12 billion, it is impossible to imagine to what heights would raise the welfare of the generals. We believe in historical Parallels, it is worth Recalling, as the economy has spurred the native of power structures, Lavrenty Beria. Even before the nightmarish benckendorff, the future chief of police in the rank of the military commandant saved from extinction by the burning of Moscow.

Another confirmation of these truths became the St. Petersburg international economic forum. From the speeches of Ministers of the economic block have the impression that they are competing in the cemetery forecasts. The point was to ensure that the climb for the President of the frontiers in the foreseeable future will not work. That is, the Ministers admit that they do not fulfill may decrees of the President. In this case the resignation is not going to feel quite comfortable. Nothing on them not dripping.

What is this collective sabotage, or a receipt in their own mediocrity? No country in the world that for a decade of years can not get out of the pit of stagnation and growth, but still with a huge and undoubted potential, is ridiculous. Why do Ministers not firing, how to change football coaches after the failure? Can not — get away, this is not about Russian officials. As said Saltykov-Shchedrin, “not to be ready to obey and to suffer.” The riddle of the Russian tenure of the Ministers worse than the mysteries of the Russian soul.

The guest of honor SPIEF was the President of China XI Jinping. When China began economic reform, comrade Mao said that the most worthy occupation for the Chinese to dig the trench and stockpile grain. For 40 years the GDP of China grew 37 times. Before the reforms, China’s GDP was four times less than our country is now four times higher. If China is our friend, maybe they write and tell you how to reform? Or we don’t want to live richly, because rock the boat? This option is not excluded.

See also:  The IMF no longer needs to raise the price of gas, — Gerus

A year ago the guest of honor SPIEF was Prime Minister of Japan Shinzo Abe. In Japan during the period of reforms in the 1950-1980-ies of the GDP has increased five times, the country has become a global technology leader and for the first time has forced US to start in this trade war. But Japanese hints us the wrong way. In China and Japan small and medium business provide 60-70% of GDP, in Russia — three times less. This class in other countries lays the Golden eggs, and in Russia — to mouth, under constant threat of prosecution and punishment. If by chance a calico?

If someone else’s example to us is not science, why do we need a forum in North Palmyra? First, it is like the Olympics and world Cup. For us, the fanfare is more important than the result. As Kozma prutkov: “there is a first company Sergeant-major, as furniture”. Secondly, nowhere in the world so often Ministers do not sit in the assemblies, as in Russia. It is unclear when work and not necessary. The meaning of life — from one forum to another. As Mikhalkov: “We are going, going in distant lands, good neighbors, happy friends.” Progress report — a report to the next forum, and the alleviation of the plight of his subjects — an annoying encumbrance.

But there is a problem, which met the Ministers of Economics, is competitors the security forces. It is attributed to the destructive effect on our business and General political atmosphere. As said by the MP Andrey Makarov, “business is risk and fear, and now the only one left to fear.” Deputy Prime Minister Anton Siluanov said that the behavior of the security forces deters business. Former Deputy Prime Minister Alexei Kudrin added that without the reform of law enforcement system we will be no growth. He also reported that outflows from Russia reached a record speeds. Lamentations are net-exposure. Patriotic billionaires, they’re real colonels of the country’s capital is not withdrawn and did not even travel to overseas resorts. And what country palaces, pleasing Russian landscapes, building security forces! Them and cards in hands.

For many years there has been talk that it is vital to stop scaring business. Fruitless and a waste of time. The President and the Prime Minister repeatedly cited scary figures. If nothing changes, hence, should not be changed. Homeostasis and symbiosis. Nightmare and pressing business, the natural state of the Russian economy. Security officers — orderlies of the forest, the best of them become managers.

See also:  The secret expenses of the Russian budget for security will be a record for 12 years

On the sidelines of SPIEF was whispering about the arrest of investor-Russophile czars and about the detention of journalist Ivan Golunova, which plagued major Metropolitan business. In the end, the President had to say on the subject, he recognized the existence of “security issues”. In his opinion, in addition to liberalization of the legislation, as well as the “cleansing of power structures and judiciary from unscrupulous individuals” we should expect a positive impact of digitalization of public administration.

Frankly, I do not believe in digitalization. First, Russia is not China, where science and education enjoys the full support. Secondly, the first link that pulls business, is respect for private property and an independent judiciary (as in China) and not to the service the drive mechanism. In other words, the car was driving, you need the driver, not the control panel. In addition, the digitalization we will call what the allocated money. As the fitter Mechnikov: in the evening the money in the morning — digitization, no matter how it looked.

Enough beating around the Bush! We’re talking about a command economy, but may decrees — also mobilization, growth on the whistle, and that we must find the perpetrators, for whom the opinion of the commander in chief — that’s an order. In particular, in the economy. It is time to recognize that Russia is in historical fact — a police state. As soon as it falls discipline and blooms mnogoie, immediately followed by the destruction of the foundations and weakening the bonds. Education too often leads to bloodshed, and freedom is a dark. If you entrust the responsibility for the economy of the security forces, to trust them not only the functions of the regulator and the whistleblower, but also the inspirer and stimulator, the state will come good, and citizens — relief.

On the days of SPIEF was another anniversary of Pushkin. “Our everything” in the novel “Dubrovsky” described raider seizure of the neighboring property, which was held by the landowner Kirill Troekurov. But many people forget that troyekurov was General-in-chief. Military rank of the second class in table of ranks, almost a field Marshal. One word is an effective Manager.