Home / Society / In Venezuela, part of the military moved to the side, Howdo — locked Central base

In Venezuela, part of the military moved to the side, Howdo — locked Central base 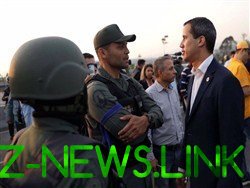 In Venezuela right now is the attempt of a military coup. Sided with the opposition and the military took up positions near the airbase La Carlota. About it on Twitter said the Minister of information of Venezuela, Jorge Rodriguez

State Internet provider Cantv of Venezuela has restricted access to Twitter, Periscope, Facebook and other social networks in the country, according to Latin American media with reference to the organization of Netblocks, which monitors Internet traffic in the world. The rebels began negotiations with Gouda about the interaction.