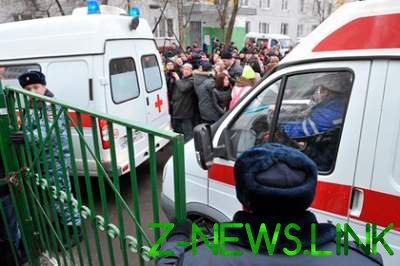 The boy bought a knife for lunch money.

In the suburban Vysokovsk 14-year-old student arrested for attempting to kill with a knife to a classmate. On Wednesday, November 29, “the Tape.ru” reported in regional Department of the Investigative Committee of Russia (TFR).

The incident occurred on the morning of 28 November at Vysokovsky school. Being in a history classroom, the boy came to the classmate behind and hit him several times with a knife. The wounded teenager was hospitalized in serious condition with stab wounds to the head, face and neck. The attacker was detained, the teacher and handed to the police.

“Against the teenager criminal case on attempted murder. He was detained and interrogated, the question on election concerning it a preventive measure”, — said the representative of the Moscow Department of the TFR Evgeniya Kiryushina.

According to her, the detainee complained to the investigators that he was constantly bullied by classmates. In order to take revenge, it is a few days saved up money that parents gave for lunch, and bought a knife for 800 rubles. The victim student chose a peer, from which he got more rest.

November 1, 18-year-old Moscow student killed a teacher in College, did a selfie with the corpse and posted on the web. After that the young man committed suicide.