Home / policy / In the state Duma the law on the abolition of the document, which condemned the Molotov — Ribbentrop Pact 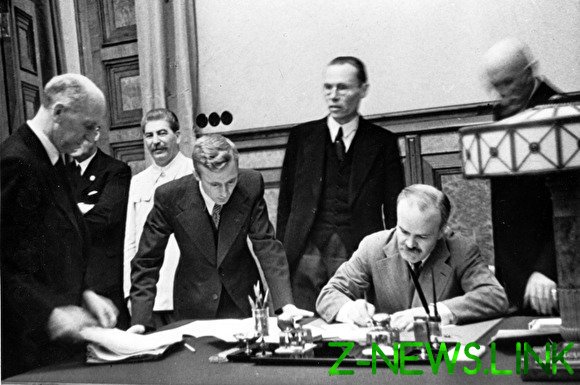 The leader of the Motherland party, state Duma Deputy Alexei Zhuravlyov introduced to the Senate a draft law that in case of acceptance recognizes invalid on the territory of Russia the decree of the Congress of people’s deputies of the USSR, condemned in 1989, the so — called Molotov-Ribbentrop Pact signed in August 1939, just before Hitler’s attack on Poland and the outbreak of the Second world war. The bill is reflected in the database of the state Duma.

The resolution “On political and legal assessment of the Soviet-German non-aggression Pact from 1939,” the Congress adopted 24 December 1989. Zhuravlev in his bill offers this document to cancel, because the decision, as stated in the explanatory note, “is not consistent with the principles of historical justice and customary in the context of growing political instability of those years, coupled with pressure from external forces.”

The Deputy considers that in preparing the draft regulations in 1989, the authors were not guided by principles of objectivity and impartiality, and focused on the condemnation of the additional secret Protocol, as expressed Zhuravlev, “geopolitical transformations in Europe before the Second world war.” Zhuravlev believes that the emphasis on the secret nature of the Protocol and the findings that some of its provisions contradicted the sovereignty and independence of third countries, “cannot be substantiated”.

“The practice of signing of the secret protocols characterized the diplomacy of the time, and economic and political interests of States in a particular region are always present in international relations. The Protocol did not envisage a change of borders of other countries in any way, including the military. Unlike methods today, when “democracy” is exported using the “orange revolutions”, by overthrowing legitimate governments”, — is told in the explanatory note.

Alex Zhuravlev added that the preparation of regulations in 1989, its developers simultaneously pursued another goal — “to create the illusion of legitimacy to secede from the USSR, the Baltic republics, allegedly included into the USSR against their will”.

“In the end, the decision was another, additional factor start of the collapse of the Soviet Union and created a “regulatory” basis for further falsifications around the history of the Second world war. Further, the effect of regulations on the territory of the Russian Federation, distorting the historical events, their causes and consequences, does not meet the national interests of Russia and lays the ground for speculation, designed to split civil society and the prosecution in the USSR in the outbreak of the Second world war along with Nazi Germany”, — summarized in the explanatory Memorandum.

Earlier Wednesday, Zhuravlev has proposed another bill to Supplement the criminal code article 354.2 “Falsification of historical facts about the causes and results of world war II”. In the text of the draft law States that “the laying on of the USSR responsible for the outbreak of the Second world war or the denial of the primary role of the USSR in the victory over axis countries in world war II, as well as the dissemination of information about the identity of the official political ideology of the Soviet Union and Nazism, committed publicly” should be fined in the amount up to 300 thousand rubles or sentenced to compulsory work for a term not exceeding two years or to jail for the same term.