In the Bakhmut notice of Amateur “Russian world”. Video 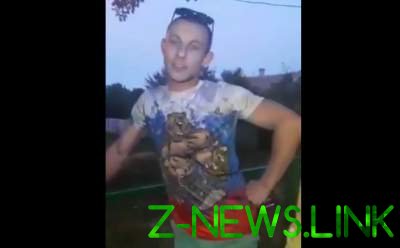 Man forced to remove a t-shirt and was taken to the station for questioning.

Internet users are outraged by the news that in Bahmut, Donetsk region notice of Amateur “Russian world”, whose wife works in the Ukrainian military Prosecutor’s office.

According to her, the man a few days walking around in a t-shirt in the colors of the Russian flag with the symbol of Russia is an aggressive bear.

“For veterans, released “from scratch”, it was a mockery and an outright provocation. Honestly, not beaten. Restrained struggling. Conducted educational conversation,” said Chudnovets.

She said that after the man said that the Russian-occupied Crimea and Ukraine matter to him, and they called the police.

“It was interesting to hear from his wife that she was the accountant of the military Prosecutor (AU, Bakhmut), but is openly Pro-Russian views and despises the Ukrainian military. Thank God the cops were very adequate and acted in absolute compliance with the law”, – said Chudnovets.

She said that the man was forced to remove a t-shirt and was taken to the station for questioning.