In tandem Putin-Erdogan leadership goes to the Turkish President 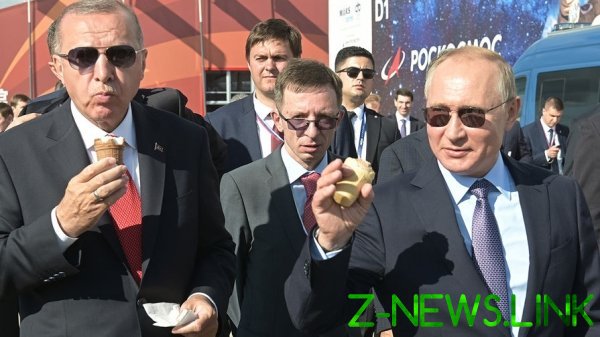 The Kremlin continues to face, but losing ground

Turkish President Recep Tayyip Erdogan moved to Syria from threats to action. The Turkish head of state said on Monday 3 February that his army and air force have caused massive strikes in Idlib province against the troops of Russia’s ally Syrian President Bashar al-Assad. The formal pretext to intensify the Turkish armed forces in this country was the death of several soldiers from Turkey as a result of deliberate, according to Ankara, the artillery attacks on the positions of the Turkish army by the army of Assad.

According to Erdogan, quoted by the Agency Bloomberg, the Turkish F-16s struck 46 goals in Syria. “Turkey responded with a powerful shot to the shelling in Idlib and will continue to do so in the future,” said the Turkish President.

However, the defense Ministry said that the Turkish aircraft did not violate the state border of Syria and attacked the positions of Syrian government forces. Anyway, in the North of Syria was canceled and another Russian-Turkish patrol, which was to begin on 3 February.

Meanwhile, the recent military strikes of Turkey in Syria against the troops of the main ally of Moscow — Bashar al-Assad, is not the only hostile attack Erdogan in the Kremlin. At the same time a statement about these attacks the Turkish leader, on the eve of his visit to Kiev, called the annexation of Crimea to Russia, “annexation,” and expressed concern about the situation of the Crimean Tatars on the Peninsula.

Earlier, the Turkish President said that it would not tolerate the presence of Russian mercenaries in Libya, and expressed dissatisfaction with the fact that Russia did not provide the technology of production supplied to Turkey anti-aircraft missile systems s-400.

About what caused such a rift in Russian-Turkish relations and what it can lead columnist of “Rosbalt” talked with the orientalist, head of the Centre Europe-middle East, principal research fellow at the RAS Institute of Europe Alexander Shumilin.

— It is obvious that Moscow the last few years, after the crisis over the downed Russian su-24 was considered and considers Turkey as an economic partner and even military-political ally. In this regard, in your opinion, what might be the consequences of the current sharp deterioration of Russian-Turkish relations?

Last time, it is clear that the tandem Putin-Erdogan championship goes to the Turkish President. And he is not shy to show it, so that in the first place, to show the Europeans that he’s not so Pro-Putin and Pro-Russian politician. Erdogan would like at least to maintain a balance between Russia and Europe. It is for him now the most important line of conduct from that moment he made the decision to provide military assistance to the Government of national consensus (NTC) in Libya.

In this situation, it became clear that Erdogan is playing a game aimed primarily at strengthening security around Turkey, but in this context, it is even harder to not share it with Europe. Provide them with military support to the NTC, headed by Faiz by Sarraj, by and large, the same gesture of loyalty towards Europe and the UN in the Libyan issue.

It was a new stage in the policy of Erdogan, expanding what he’s doing in Syria to the Eastern Mediterranean region as a whole. His actions in this vein involve the opposition of Russia and opposition to it here. It is quite explicit verbal, but without the desire further aggravation of relations with Moscow. Erdogan solves a number of economic challenges.

In particular, in the waters of the Eastern Mediterranean sea should be laid a gas pipeline from Israel to Europe. Controlling this area, erdoğan is able to create more favorable conditions for the pipeline alternative “Turkish stream”.

— How are the Europeans to do this?

— Strengthening of control of Turkey in the Eastern Mediterranean, of course, does not cause delight in Europe. On the contrary, it causes the protests of the Greeks, Cypriots, partly of the Italians. To solve these problems, Erdogan declares his opposition to Putin in Syria and Libya, thereby holding the hands of Europe and the United States.

— Do you think that the recent actions of Erdogan in Syria caused by his desire to improve relations with Europe?

— Yes, of course, relations with Europe Turkey’s significant, but now they are sharper. There was a period of cooling associated with the policy of Ankara and the Kurdish issue, and with the purchase of the Russian s-400. Now he wants to turn the page, and all of his promises and positive signals are now sent to Europe and NATO through the expected cooling of relations with Russia.

— Yes, lately on the part of Erdogan to Moscow rained down a hail of claims and accusations. In particular, it was that Russia, together with the s-400 did not set their production technology.

— Yes, the agreement on the transaction involves the transfer of those technologies to Turkey.

-With regard to the situation in Libya, we remember how hard the statements of the Turkish leader about the illegality of the presence of Russian mercenaries, the Kremlin made an attempt to mitigate emerging here of the Russian-Turkish confrontation, invited to Moscow both sides of the inter-Libyan conflict. However, the positive effect from this was never Sarraj and his opponent General Khalifa Haftar to the negotiating table in Moscow so do not sit…

— Most importantly, to mitigate the Russian-Turkish aggravation at the moment of success. Let me remind you that Erdogan then banged his fist on the table and said that no occurrence of the Haftarot on Tripoli (capital of Libya, where the NTC is based Saraga) should not be. As a result, Russia was in limbo — I had to save face and somehow get out of this situation. That came up with this meeting in Moscow, which ended in nothing.

But a nice gesture failed — it was supposed to symbolize that Moscow moves to a balanced position on Libya. That is actually Erdogan has forced the Kremlin to slip off of the support line of General Haftarot on-line mediation and agreements between the two sides of the Libyan conflict. This is the essence of what happened.

— That is, it turns out that Putin is in Libya face retained but not played…

And he was not able to do it. There is and had to save face and to think through the tactics out of this situation. And break the line there was not, Erdogan said, “no.”

In Syria, now Erdogan is likely to increase the power of their strikes on Assad’s army.

— And Russia will disavow these attacks on the informational level, which makes now our military… But, as I understand it, to go to war with Turkey, Russia, in my opinion, now there is no desire?

No no no no! It is possible. It is already clear that the Russian military avoid the slightest possibilities of a collision.