In Putin’s Russia abandoned 44% of all agricultural land – 97,2 million hectares 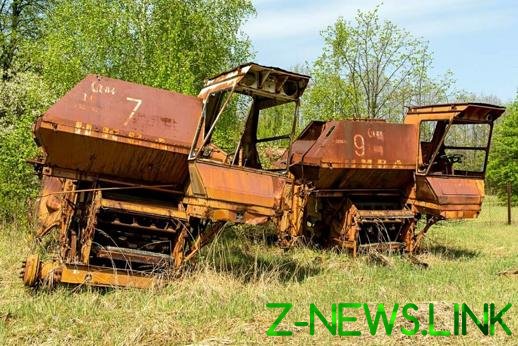 While the media not so long ago were full of headlines about that, they say, Russia will rule the world with exported grain, which, it turns out, is Putin’s “hybrid arms.” And hungry the West on this occasion sounded the alarm. However, upon closer examination it appears that the spokesman for the “West” is the only one how would the us short-run magazine National Interest, published by the former Soviet citizen and now a co-host of the program “Big game” on the First channel while TV. And the saddest thing here is that the agricultural might of the Russian Federation exists only on the pages of his magazine.

He operates with the General concept of “grain”. But grain to grain is different. Grain Russia exports mainly wheat. Moreover, the wheat of the third and fourth grades, at competitive prices, main buyers – dozens of poor countries in Africa, Asia and Latin America. And in any case, to reduce exports, moreover, to threaten the world and to blackmail him with – natural suicide strike on its own agriculture. According to the International trade centre UN, in 2018, Russia sold wheat at $ 8.4 billion. And it’s worth it to abandon the export of wheat, as the vacant niche on the world market will immediately take China, USA, Canada and Argentina.

The gross grain harvest in Russia is approximately 120,6 million tons. 70% of them is wheat. In the US, the gross grain harvest of approximately 430 million tons. Wheat from them – only 17%. In developed agricultural countries, most of the gross harvest forage, fodder grain. To feed the beast and had their own meat, milk, cheese. The Russian Federation as from this care get rid of – immediately after the collapse of the Soviet Union, the economy began to cut collective and state cattle, which in the USSR was not enough. Plagued the population. By 2005, the number of cattle in Russia, compared to the years 1986-87, decreased 2.6 times. Cows only – 2 times.

From 2005 to 2017, in 13 years of Putin’s special “programs”, after the cost of trillions of rubles cows in Russia has become even less. By 2018, the number of cattle, compared to the years 1986-87, decreased 3.2 times, only cows 2.6 times. Fifteen years of loss in all senses. A major, irreparable loss – years. Meat and dairy farming they are long. Here and there in Russia, now its milk in abundance.

Same thing with meat. In 1990 the RSFSR was made 4329,3 million tonnes of beef in 2018 in Russia – 1608,1 million tons, 2.7 times less. The payback period of projects for the cultivation of meat breeds has reached 11 years. Here only the state can rectify the situation, since the state is supposed to think in the long term. But, as life shows, 15 national projects on “rural development” have been wasted, enriching Putin and company for trillions of rubles.

Those are the current, artificially created circumstances. In fact, Russia is living food imports: for example, meat and meat products are imported all the way from 20 countries. So in comes the propaganda. The average citizen, hearing, with reference to the American magazine National Interest that the world as if afraid of the reduction of grain exports from Russia may foolishly believe and proud of the strength of domestic agriculture. Meanwhile, analyzing the results of the last agricultural census, experts Ranepa came to the conclusion that in Russia the abandoned 44% of all agricultural land – 97,2 million hectares. This is the territory of the two Frances. Try to imagine two in France, overgrown with weeds.