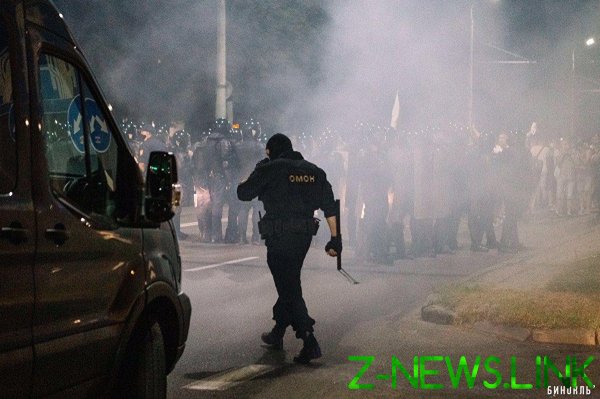 In Minsk, where the second night, protests are due to the fact that the Central election Commission of Belarus declared victory in the presidential election of Alexander Lukashenko with the result 80,08% of the vote, demonstrators, security forces throw Molotov cocktails and fireworks. On the road lay a homemade “hedgehogs” from nails or sharp metal rods that puncture the tires of the transport police officers. In particular, according to the published in, there were several cases when citizens are driving cars were hit by the guards.

The police, in turn, severely beat protesters and shoot them with rubber bullets, used tear gas and using stun grenades.

Information, how many people were injured in the clashes, at the moment. The correspondent of “Radio Liberty” (by the decision of the Ministry of justice of the Russian Federation, included in the list of performing functions of a foreign agent) was told that after the first night of the collision, on the afternoon of 10 August, in the second surgical Department of the military hospital in Minsk there were 26 wounded with severe burns, shrapnel wounds and bullet wounds from rubber bullets.

As a result of the protests in Minsk from 10 to 11 August a man was killed. The interior Ministry said that in the hand of the citizen blew up an unidentified explosive device that he was about to throw at law enforcement officers, but reporters from the scene is denied. According to the correspondent of the newspaper “Nasha Niva” siloviki “massively shelled” demonstrators.