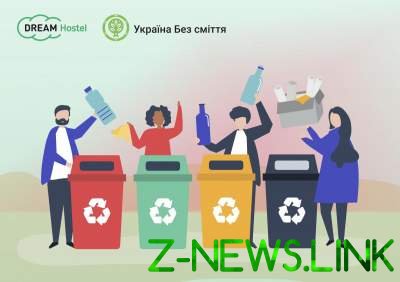 As reported in the press service of the Hostels DREAM, along with a “project”Ukraine without smittya” the company has established containers for the collection of recyclable materials in a hostel in Kiev.

At the moment, several containers are at the entrance of the hostel next to the reception and in the kitchen for convenience. Even better the process of garbage collection, but foreign and Ukrainian guests very quickly began to support the initiative. In addition, the staff began to sort the garbage at home and bring waste that can be recycled, to work.

In particular, in the hostel on Andreevsky descent it is possible to sort the following types of recyclables:

Plastic: plastic bottles, plastic bags, containers from the hygienic and detergents, Tetra Pak. The main requirement is that the containers were pre-washed and folded.

Before this started to sort the garbage in another institution of the network – DREAM Hostel Zaporizhzhia.

“We understand how this is a big problem in the country, when faced with it. As it turned out, Ukraine is almost the only firm, which is engaged in the export of recyclable materials at the point of reception. Every time when I dialed a new phone number in the search company said: “girl, we about your hostel already heard, and I can’t find anything to help you.” In addition, it is noticeable that in the minds of people still haven’t formed the habit of sorting garbage and this will take a lot of time. It often happens that people throw out quite a third-party the trash in the tanks, which are designated, for example, strictly for the paper,” said operating Director of a network of DREAM Hostel Marina.

In the project “Ukraine without garbage” also praised the initiative, noting the importance of developing environmental awareness in tourism.

“It is very important that the business sector, travel and tourism, gradually attached to the culture of conscious consumption, as tourism is also a major source of pollution and produces a lot of waste. Parliament initiatives Hostels DREAM, because it is important to establish sorting and recycling of waste not only at home but in all the places where people produce garbage”, – said the founder of the project “Ukraine without smittya” Eugene Oratovska.